Dumfries and Galloway in Scotland is already known for having the most haunted road in the UK (see Scotland’s A75 the Haunted Road, previously in Spooky Isles). MJ STEEL COLLINS tells us some more haunted places in the region.

Built in the early 18th century, Bonnie Prince Charlie made a pit stop here in his efforts to reclaim the Scottish throne. It is believed his ghost, or at least that of another Jacobite, haunts the building. In 1936, a guest saw an apparition in Jacobean dress appear in his room, looking deep in thought and quite worried. The ghost turned around and vanished. Later on, the guest realised that the ghost was that of Bonnie Prince Charlie. It also turned out that the room in which the ghost appeared was the one used by Charlie during 1745. Much of the building has changed from how Charlie would have seen it. There were renovations during the 1900s, and in 1984/5, the façade of the building was retained, whilst much of the interior was demolished.

The actual farm, Ring-Croft of Stocking, no longer stands, though the site where it once stood can be visited in the village of Auchencairn.
It started when the smallholder, Andrew Mackie, found one of his cows suspended from the ceiling of the barn, her feet barely touching the floor. Things spiralled into a cacophony of mayhem. The farmhouse was pelted by stones on, inexplicable fires occurred, things went missing, furniture danced and the Mackie children were hit by an unseen force. The entity found a voice, ordering anyone praying to “wheest”.
Andrew Mackie sought help in his parish minister, Rev. Andrew Telfair, who very quickly became heavily involved, becoming a frequent target for the poltergeist, which would either hit or throw stones at him whenever he tried to invoke God. Soon it became local knowledge. In attempt to quell the poltergeist, the entire community were involved in ‘a day of humiliation’, when everyone fasted and prayed for the Mackies, to no avail. One day, Mrs Mackie discovered a loose flagstone in the kitchen floor one morning, and removing it, found a ‘witchcraft package’, containing small bones, blood and flesh. Mrs Mackie ran to her landlord for help. On 3 April, a strange letter written in blood was discovered. It was marked “3 years thou shall have to repent a nett (note) it well”, with a strange, ominous warning for Scotland written inside. The appearance of the note resulted in the local magistrate rounding up the entire neighbourhood to the Mackie’s home and making them touch the witchcraft package one by one to see if it would react in the same way it was believed a murder victim’s corpse would react if touched by the murderer. Nothing happened.
It all ended at the start of May when some neighbours saw a black entity in the barn, which expanded to fill the building.

Comlongon is a 15th century tower house, onto which a mansion was built in the 19th century. Now a hotel, the castle is haunted by a Green Lady, thought to be Lady Marion Carruthers. In the 16th century, she was facing an unwanted marriage to Sir James Douglas of Drumlarnig, whose family had their eye on Marion’s inheritance, Mouswald Castle, standing a few miles away from Comlongon. Wishing to avoid the marriage, Marion turned to her uncle Sir William Murray, who lived at Comlongon. In the end, she threw herself off the top of the tower and killed herself. Grass would not grow on the spot she landed and her spirit has been seen crying around Comlongon. In the late 17th century, the miller at Lochmaben, Dunty Porteous and the Laird, Sir Alexander Jardine had such a severe falling out, that Sir Alexander had Dunty locked in the dungeon in Spedlin’s Tower. Sir Alexander was then unexpectedly called away to Edinburgh on business, and forgetting about Dunty, went off with the dungeon key in his pocket. 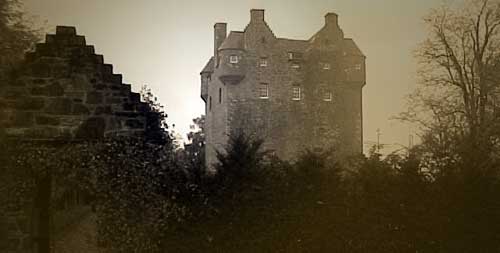 Dunty was left alone with no food nor water, loudly begging for help. When Sir Alexander returned, the dungeon was unlocked and Dunty’s dead body was found still in his chains. He had apparently tried to chew off his own hands to free himself. It wasn’t long before Dunty’s ghost was running riot round Spedlin’s Tower, screaming agony and crying for food. Eventually, a chaplain was brought in, and after a difficult exorcism, Dunty’s ghost was confined to the dungeon by placing a Bible at the dungeon door.
When the Bible became worn, it was sent for repairs. Dunty roamed at large until the restored Bible was put back at the dungeon door. The Jardines left Spedlins for a new home, accompanied by the ghost, but it couldn’t cause much chaos as the Bible went with the family. Spedlin’s Tower fell into dereliction until it’s restoration in the 1960’s. Dunty’s ghost is said to be back there, but still subdued – if you place a stick in the window of the dungeon where he died, it looks as though it has been chewed.

Bladnoch is a one street village, outside which sit the ruins of Baldoon Castle. The ruins are haunted by the ghost of Janet Dalrymple, who walks in the middle of the night, her white dress stained in blood. She was forced to marry David Dunbar of Baldoon by her parents, though she loved another man, Archibald, Lord Rutherford. 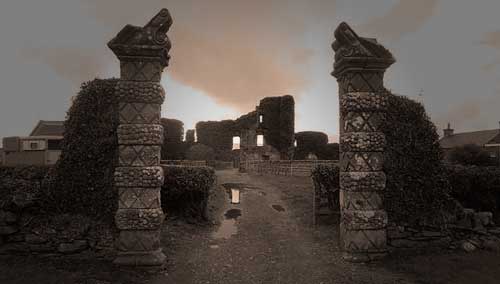 There are varying versions as to how she met her death – a tale immortalised by Sir Walter Scott in The Bride of Lammermoor. One tale has it that she stabbed Dunbar on their wedding night and died losing her mind; another has it that it was Dunbar who stabbed her, whilst another states that Lord Rutherford snuck in and stabbed Dunbar. In the end, he survived and went on to marry again. Local legend has it that the Devil stabbed Dunbar and tortured Janet to death, making her insane in the process. Her ghost is said to walk on the anniversary, claimed by Scott to be 12 September.