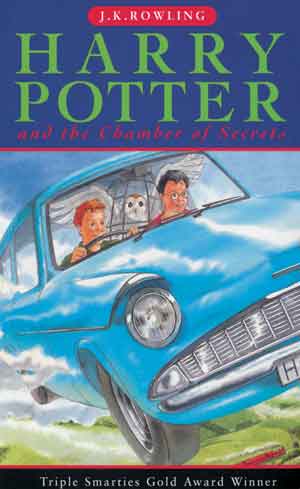 HARRY POTTER AND THE CHAMBER OF SECRETS IN 140 CHARACTERS: The Chamber of Secrets is open and something terrible is unleashed upon Hogwarts, petrifying students and threatening to kill next time.
PLOT: Someone doesn’t want Harry to return to Hogwarts this year and tries everything they can to keep him from going back.  Alas, Harry doesn’t let anything get in his way of going back to where he finally feels at home.  But, he finds that things at school are quite ominous this year.  Mysterious writing appears on the walls written in blood, people are being petrified and Harry discovers he can speak a strange language he didn’t even know he knew.  A friend is being blamed for the awful things that are happening and Harry is determined to prove their innocence.

FUN FACT: The flying Ford Anglia in this book has been slightly modified by Mr Weasley so that it will comfortably fit eight passengers, six trunks, two owls and a rat.
SOMETHING TO SAY TO PRETEND YOU’VE READ IT: “Who would you choose to change into if you had a pot of Polyjuice Potion?”

FILMED AS: Harry Potter and the Chamber of Secrets (2002)

SARAH’S VIEW:
When I was a kid, I wouldn’t need asking twice if someone told me not to go back to school that year. But despite an obnoxious little house elf stealing his mail and getting him into trouble with the Ministry of Magic, Harry is determined to go back to Hogwarts anyway. As it turns out, he was fairly warned—there is some serious creepiness going down this year.  I love the transition from Happy Hogwarts to Dodgy Hogwarts. Gone are the warm fuzzies from Harry’s first year where he’s safe, cosy and well-liked. The castle is now harbouring a secret. In fact, a whole chamber full of them.
The Chamber of Secrets has been opened and of course Harry, Ron and Hermione are the only people on the scene, as seems to always be the case. Harry is immediately a suspect for being the heir of Slytherin and with the discovery that he shares a disturbing trait that only Voldemort is known for, he’s not so sure.  Harry realises that because of his Muggle upbringing with the Dursley’s, he doesn’t fully know his own family history and he begins to doubt himself. For all he knows, he could very well be Slytherin’s heir and perhaps the sorting hat made a mistake in placing him in Gryffindor…
Harry knows he must face whatever is in the Chamber of Secrets. Only then can he see what he is up against and also to prove to himself that he is the person he wants to be.
WHAT I LOVE ABOUT THIS BOOK: There’s a sinister aspect to this book that wasn’t apparent in The Philosopher’s Stone.  We’ve seen Hogwarts as warm and welcoming in the first book; now we can see that it has a dark side as well.
WHAT I HATE ABOUT THIS BOOK: Giant spiders.  Enough said.

FOLLOWED BY: Harry Potter and the Prisoner of Azkaban