Some call Most Haunted fake, but others disagree. Guest writer FIONA GLASS takes a look at controversial paranormal TV programme, loved and hated in equal quantities…
I can’t remember when, exactly, the doubts about Most Haunted started to creep in. I’d been watching the show for some time – at least one series and possibly more – and had, until then, loved it.

The very first episode I ever caught involved an old abbey. It was ancient, it was ruined, it was simply overflowing with Gothic atmosphere and ghosts, and my background as a historian meant I was instantly hooked. Flicking through the cable channels one evening, I paused, got involved, got scared, and watched to the end – and hunted down further episodes set in caves, old theatres and stately homes, like a bloodhound with a paranormal nose.
At first I liked the format, with enough historical information about each venue to lend it some gravitas; plenty of filming of weird events after dark; and of course, resident medium Derek Acorah contacting some of the restless spirits and finding out more about who they were. 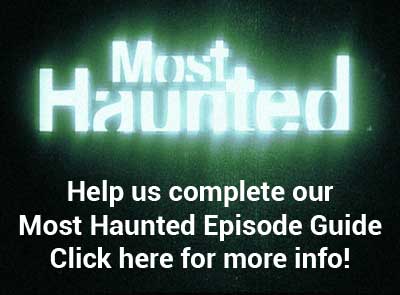 Gradually, though, questions began to stir. It all seemed so convenient. No matter where they turned up, at which kind of property, with whatever kind of paranormal activity, the ghosts always appeared as if on cue. If there weren’t ghosts, there were orbs, “captured” on camera, or some kind of unusual movement – doors slamming shut, furniture rocking, footsteps when there was supposedly nobody about. And there was always a lot of screaming. But somehow, in episode after episode, it felt like behind the effects, nothing much was actually happening.

Read Article: Most Haunted – do you love it or hate it?

Ghosts tend not to be a regular or predictable occurrence. Even at some of the most haunted properties in the country (Bolsover Castle, for instance) they appear at random, over extended time periods, often with no showings at all for months or even years. So how come they were always on hand when the Most Haunted film crew turned up? Was there a possibility that sometimes, there was no supernatural activity to film? And if so, how much of the programme was down to good, old-fashioned special effects? After all, so much of what they seemed to be filming would be easy to fake, especially in the dark. All of the interiors could have been one big film-set, with objects rigged to move of their own accord; or people could have been employed to make things move, and then edited out afterwards.
I started to notice other things. The orbs often looked as though they’d been added onto the film afterwards. The contact with spirits was very much hammed-up, and regularly involved people whose names didn’t match the genuine, painstaking historical research. And at about the same time, there were some fairly lurid revelations about Derek Acorah’s personal life in the press. I didn’t pay much attention to those – everyone’s entitled to some privacy in my book – but in amongst the gossip was a strong suggestion that he was a fake. And added to my other concerns, it tipped the balance of probability for me between the show being genuine, and it being a hoax.

I still don’t know for certain which is true. There are claims that the whole programme was heavily scripted, and that presenter Yvette Fielding and her producer husband faked some of the effects. However, most of these seem to be from rival psychics who may or may not have had an axe to grind, and there doesn’t seem to be any actual proof one way or the other. I’ve never read a full account of the filming process by a member of the original crew, and for all I know it might have been entirely genuine. As with most things, I suspect the truth lies somewhere in between; mostly, it was faked, but occasionally they saw things or captured things on camera that not even they could explain.


In the end the doubts – and the endlessly unchanging formula – got too much for me and I stopped watching the show. But I’ve never forgotten it, or my doubts. And when I was looking for inspiration for my own book, ‘Got Ghosts?’, in which a TV production company film at supposedly haunted properties but fake absolutely everything, it was to Most Haunted that I turned for some of my ideas. And real or not, I’ll always be grateful for that!
FIONA GLASS says: “When she isn’t being a pane in the glass, she lives in a slate cottage within stone-throwing distance (never a good idea in Glass houses) of England’s largest lake. She writes paranormal and dark contemporary fiction and has had two paranormal romance novels and a novella published. Her latest book, ‘Got Ghosts?‘ (a paranormal romp about a TV production company filming at the haunted manor house of Greystones Hall) is available now on Amazon.