Located three miles from Larne, Ballygally Castle overlooks the Irish Sea. It is the only 17th century building in Northern Ireland still used as a residence and is reported to be very haunted.
Ballygally Castle has a number of ghosts within its walls, the main one being the former resident Lady Isobel Shaw.
Lady Shaw is known to go round room doors late at night, knocking at the doors and sightings have been seen especially on the tower stairwell. She had been locked away in a room and reportedly fallen to her death trying to escape.
Madam Nixon is another resident ghost. She lived in the castle in the 19th century and can be heard walking around the castle in her silk ballgown.
The small room in the turret of the castle is known as “The Ghost Room” but is not used by the hotel as a room.
But you can stay at Ballygally Castle as it is now a hotel and restaurant situated on a beautiful stretch of the shoreline. Carrickfergus Castle is a Norman castle located in the town of Carrickfergus. Origins of the castle stretch back to 1185 were it started off as a positioned fortress.
One of the ghosts said to haunt the castle is a young soldier only known as Buttoncap. He met a violent death due to a case of mistaken identity.
Buttoncap was executed at the castle and vowed to haunt its grounds forever. 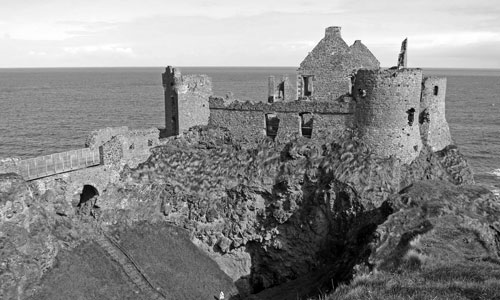 Situated further up the Antrim coast from Ballygally Castle, we come to the breathtaking Dunluce Castle.
This large majestic building was built on the clifftops overlooking the ocean, Dunluce Castle was built in 1500 by the McQuillans who came from Scotland in the 13th century as hired mercenaries.
The MacDonnells arrived 50 years later from Islay and took the castle by force. However, they had a hard time of it as over the next 100 years they were continually besieged by the English.
The English finally succeeded in taking the castle over but not before the MacDonnells succeeded in scaling the walls and hanging the English captain, whose ghost is said to haunt this tower to this day.
Another ghost that frequents the castle is that of Maeve Roe, the daughter of Lord McQuillan, she was the only girl and her father had decided she would marry Rory Og, a relation to the McQuillans.
However, Maeve had already fallen in love with Reginald O Cahan. His family and Maeve’s were bitter enemies and Maeve had met him when he was taken prisoner at the castle.
One night, Maeve was locked in a tower and Reginald managed to rescue her, they ran to mermaids’ cove beneath the castle and set off in a rowing boat, however, tragedy struck as the boat was bashed against the rocks and both were killed. Reginald’s body was washed ashore but Maeve’s was never found and her ghost is said to haunt the castle walls. 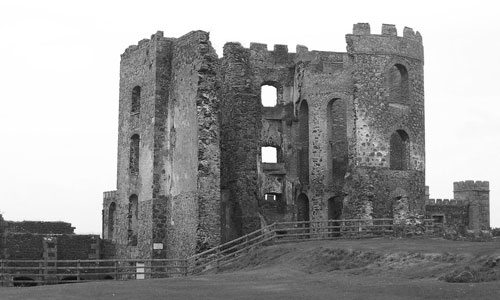 Shanes Castle is a ruined castle near Randallstown.
It was built in 1345 by the O Neill dynasty on the north eastern shores of Lough Neagh.
It was believed that a banshee named Neinny Roe haunted the O Neill family at Shanes Castle. Tradition held that the banshee was the daughter of an O Neill member and a chamber was always kept and prepared for her.
Shanes Castle was destroyed by fire in 1816.
The story goes that as the fire took hold a party was underway at the time and as guests were leaving a Captain Greer who was the county magistrate stated he had seen a person dressed in armour pass by the upstairs window. Gosford Castle is situated in the Markethill area of Armagh.
It was commissioned to be built by the second Earl of Gosford, Archibald Acheson.
Legend has it that Gosford Castle is frequented by a spirit known as the Green Lady of Gosford.
Her name is not known but the tale goes that is was a young lady working in the Acheson family household.
During her time there she met and fell in love with the son whom she bore a child too.
The Acheson family tried to prevent a scandal by turning the girl and the child out of the castle, both perished from exposure.
On evenings, she can sometimes be seen moving through the gardens seeking shelter and her lost love.

Glenarm Castle stands 40 miles from Belfast in the beautiful mixed background of forests and sea. It has been in the McDonnell family since it was first built in 1636. For 400 years there have been tales of many ghostly sightings. In the mid 1800s many guests reported seeing one particular spirit.
The same reports state a tall lady with a worn face and deep set eyes, she holds a cap in her outstretched hands.
Even in the 1990s she has been spotted. The castle even received an exorcism except for the attic. After this the members of the McDonnell family have said there to be terrible stamping noises and bangs coming from the attic. Even though owned by the Hamilton family since the 17th century, parts of the castle date back to the 12th century.
In and around 1625, Hamilton moved from Bangor to Killyleagh Castle where he built the courtyard walls. James Hamilton supported the Stuart Monarch Charles 1 and the castle was besieged in 1649by Oliver Cromwell’s forces.
Hamilton’s wife was renowned for her charm and managed to negotiate a pardon for her husband and it is said such was her love for the castle that her ghost still haunts the great hall to this day. 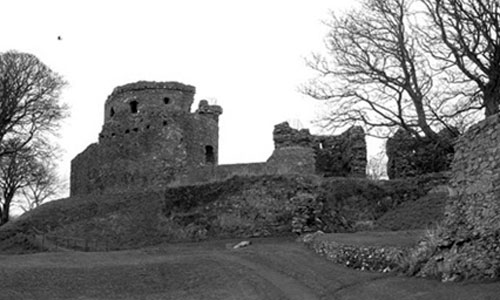 Situated above the town of Dundrum stands the 13th century castle. It was constructed by John De Courcy near the beginning of the 13th century following his invasion of Ulster. The castle is said to be haunted by the ghost of De Courcy. 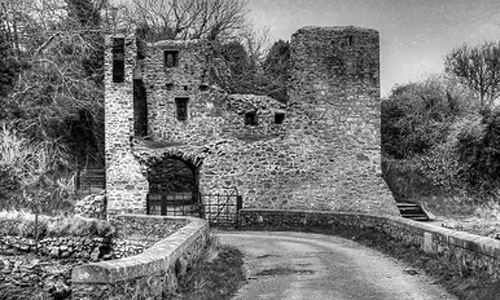 Also known as Nendrum Castle. It was built on Mahee Island on Strangford Lough.The castle was built in 1570 by an English soldier Captain Thomas Browne. It was abandoned in the early 17th century.
According to folklore, the veil between this world and the spirit world is always thin here as opposed to the rest of the world when it’s only thin at Samhain (Halloween).Whispering voices can be heard within the walls and mist can be seen manifesting in front of people. 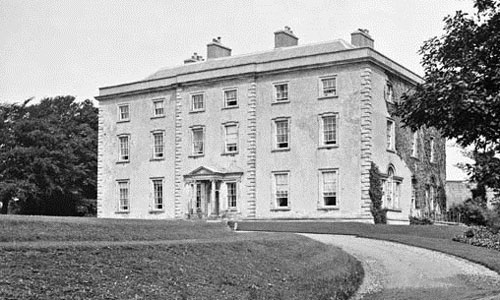 Built near Irvinestown, the Archdale family arrived during the plantation in 1611, the castle was built by John Archdale. John was succeeded by his son Edward.
The original castle was destroyed by Rory Maguire during the Irish Rebellion of 1641. Stories have it that all but 1 of Edwards children perished when the castle was burnt, the youngest being saved by a nurse who threw him out the window. Her ghost is reported to have been seen and also the screaming of children. Situated near Belleek, it was built next to the site of an earlier 17th century castle “Hasetts Fort” James Caldwell purchased it in 1670.
There is a famous ghost connected to Castle Caldwell known only as “The Ghost Of The Road”. If you are passing in a car you may see a man dressed in black walking along the road in the direction of the castle, legend has it if you stop he will get in and as you pass the gates to Caldwell he will suddenly have disappeared.
Another ghost to haunt Castle Caldwell is that of the fiddler Dennis McCabe. A close family friend, Dennis fell off the family’s barge and drowned and was so beloved by the Caldwells they erected a memorial on the grounds in his memory. 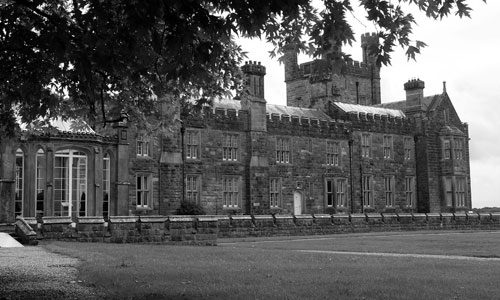 Crom Castle was the historic seat of the Earls of Erne for over 350 years. In 1971, eyewitnesses reported seeing a glowing ball of light rolling across the castle lake. Also known as Massereene Castle.  this Antrim Castle sits on the banks of the Sixmilewater River. It was erected between 1613 and 1662 and demolished 1790.
It is reported that a ghost walks the castle gardens, known by locals as the white lady. Her identity is that of an Ethel Gilligan, a servant girl who worked in the castle and was killed in a fire. Built in the 16th century, Carra Castle near Cushendun is shrouded in mystery. We do know by 1565 it was the home of the O Neill family. They had been at war with a nearby clan the MacDonnells.
Shane O Neill was killed in a fight in a church nearby. No-one knows where his body was buried but his head was sent to Dublin for public display, a headless ghost is said to appear around the ruins of the castle. Rathlin Island lies three miles off the coast of Northern Ireland and 15 miles from Scotland. On the island stands ruins called Bruces Castle. Legend has it that Bruce and his chief warriors lie in an enchanted sleep in a cave of the rock on which stood the castle and one day they will rise up and unite Rathlin to Scotland.
Robert the Bruce fled from Scotland in 1306 to regain his strength at Rathlin. The cave is a big focal point in myth and legend as outside the entrance is a protective bar and it was created by the spell of a witch to protect the children of Lir.
Another spooky anecdote surrounding the castles cave is that three men were fishing and settled in the cave for a break, they lit a fire and brewed tea. In the centre of the cave a large flat topped boulder made a good table so they placed their cups etc on it. As the tea was poured a hand shot out of the darkness and placed a fourth cup on the boulder, the men saw the hand but didn’t look up at the guest, they filled the cup and the hand grabbed the cup and withdrew back into darkness, the story goes that the hand was the hand of the devil himself. The castle was built in the town of Mountjoy by Lord Mountjoy in 1602. Secret tunnels were built to link Mountjoy House to Belville House.
The house is haunted by a former owner, a Lady Morris who hung herself in the 17th century. It is said a priest exorcised her into a bottle and the bottle is buried on the grounds of Mountjoy Castle. A mile from Warrenpoint on the main Newry Road is the old castle of Narrow Water, which in 1641 was garrisoned by a warden and his troops from Newry, under the command of Sir Arthur Tyringham.
Also at that time, Conn Magennis was a clan chief based north of the area.
During the winter, a wandering harpist had stayed with the Magennises entertaining them every night, as spring approached he had made the acquaintance of Lassara, a daughter of Magennis, he invited her to run away with him.
Previously Magennis had refused the harpist’s request to marry his daughter.
Lassara agreed to run away with him and they met the next day to make their way to Nuns Island, intending to proceed on then to his home.
As they passed by boat past Narrow Water Castle, a sentry spotted them and fired killing the harpist who fell into the dark waters, lassara collapsed and was taken from the boat by the castles garrison.
When they discovered her identity she was imprisoned in the castle, her only comfort was that she could hear the harpists music at dusk.
The warden threatened her with death unless she consented to marrying him. Lassara saw an opportunity when a guard opened a door and flew past him running to the top of the castle where she flung herself over the edge to her death.
Many have claimed to have seen the ghost of Lassara falling from the castle and also harp music has been heard in the air at night.

My hobby is collecting photos of dead people

Why I Believe in the Enfield Poltergeist