Shrewsbury in Shropshire is believed to be one of the oldest and most haunted towns in England.

With its timbered buildings and cobblestone streets, it should come as no surprise that the dead walk among the living.

Including the Grade II listed, Prince Rupert Hotel – a hotel with many ghosts to keep you up at night. 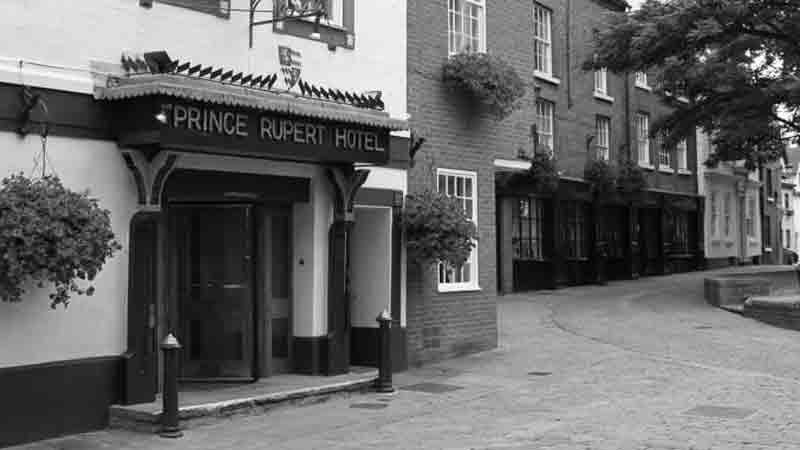 History Of The Prince Rupert Hotel

The hotel got its name after Prince Rupert, the nephew of King Charles and grandson of James I, who briefly resided there.

Prince Rupert came to Shrewsbury hoping to enlist local men in an army for the Royalist cause.

The years following the residence of Prince Rupert wasn’t kind to the building.

The owners of the building found themselves in financial trouble and decided to divide the building into five different houses. Each one selling at a huge loss for the owners.

It wasn’t until 1996, when the Matthews family acquired the building and invested a great deal of money into updating the hotel, that the hauntings became known.

Many believe it was these updates that awakened the long dormant ghosts of the hotel.

The Haunting Of The Prince Rupert Hotel

Like the age-old town surrounding it, the hotel is believed to be haunted by many ghosts from its long history.

And these phantoms are not shy in making their presence known. Especially when the living are least expecting it.

The spectre of a young woman has reportedly been encountered in the Prince Philip Suite.

It’s believed she was a jilted bride who hung herself from the rafters upon learning her groom ran off with another woman on their wedding night.

Upon entering the room, both staff and guests, have reported the horrifying sight of a woman hanging in the room.

After thoroughly shocking the eyewitnesses she vanishes before their eyes.

Another victim of self inflicted death is said to haunt room 7.

Many years ago a young man discovered his girlfriend in the arms of his best friend. The young man grabbed a gun and ended his life and pain.

His transparent form has been seen standing at the window with a distraught look on his face.

He then fades away leaving a feeling of sadness in his wake.

The ghostly form of a maid that staff has named Martha has been witnessed going about her daily chores.

She is mostly seen in the Prince Rupert suite making the bed and fluffing the pillows.

When she’s spotted, she’s said to act surprised and then vanishes.

A well known encounter happened to one of the directors of “The Christmas Carol” while he stayed at the hotel.

While in his room, he watched in horror as the ghost of a young man appeared, looked around the room and vanished through a wall.

What does the Prince Rupert Hotel offer?

The hotel offers tastefully decorated en-suite rooms and the hotel has 4 different restaurants to choose from.

In addition, the hotel is a popular venue for both weddings and business conferences.

While staying at the Prince Rupert Hotel, be sure to take in the sights of ancient Shrewsbury.

This medieval town offers both Tudor and Georgian architecture including the 12th century Shrewsbury castle.

If you, or anyone you know, has had an experience at the Prince Rupert Hotel, we invite you to tell us about it in the comments.