The album is called 20 Jazz Funk Greats and its cover is adorned with a kitsch photo of the group Throbbing Gristle standing at the edge of a cliff. 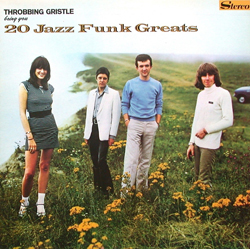 Against a lush green grass that is punctuated by bright yellow flowers, the band looks very 1970s in its summer pastels.

But the tame scene holds a much darker resonance (shades of suburban England, a touch of behind closed doors and a hint of best not talked about) because the cliff behind the band is Beachy Head.

England’s most infamous suicide spot, Beachy Head is the highest cliff on the Sussex coast and the southernmost point of the Downs.

For many years, its strange pull has lured people to its edge to fling themselves to their doom.

A local police sergeant commented: “There is something really weird on the cliff top. It seems to make the most intrepid person liable to become dizzy or frightened.”

An estimated 20 deaths a year are attributed to the site, which is regularly patrolled by Samaritans and a Chaplaincy team.

An estimated 20 deaths a year are attributed to the site, which is regularly patrolled by Samaritans and a Chaplaincy team.”

Musically they used samples and sound effects, spoken-word and distortion to carry their brand of anarchic punk on to the public. 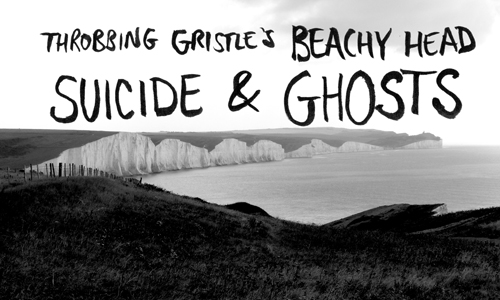 Initially they split in 1981 after releasing only three albums, but later reformed, carrying on until Christopherson died in his sleep at the age of 55 in 2010.

On 20 Jazz Funk Greats, the track Beachy Head is simple but eerily effective. A deep foghorn-like synth is built upon by another synth that sounds half way between the stirring wind atop the cliff and a motorway. The darkness is made all the more sinister by the sound of seagulls.

Many a ghost has been seen upon Beachy Head.

Most notoriously the Black Monk, who stands at the cliff’s foot beckoning those at the top to join him at the bottom – calling on them to jump.

Most notoriously the Black Monk, who stands at the cliff’s foot beckoning those at the top to join him at the bottom – calling on them to jump.”

There have also been sightings of a young woman in an old fashioned grey dress known as the Grey Lady, who has been said to walk near the cliff edge before throwing herself off.

A similar ghost is a woman who clutches a baby. She too walks close to the edge before falling to her doom. She is said to be the Victorian ghost of a farmers wife whose husband was brutally murdered.

On the Throbbing Gristle track, the wind sounds become woozy. A high pitch scrape of a synth joins in, edging ever closer to the cliff edge.

The foghorn sound shifts, as if it’s getting dizzy, darker stabs of sound merge in. Finally one large foghorn gives way to the seagulls circling.

In 1952, a mass exorcism was performed, attended by over one hundred people who gathered around large wooden crosses that were erected for the event.

But even that hasn’t stopped the lure of Beachy Head.

The Haunting of Percy Bysshe Shelley

The beast that terrorised RAF Alconbury