Edinburgh-based writer, Jan-Andrew Henderson is the prolific author of many books on Edinburgh history, including Edinburgh: City of The Dead, The Town Below The Ground: Edinburgh’s Legendary Underground City and The Ghost That Haunted Itself: The Story of The Mackenzie Poltergeist, which has the unlikely reputation among some of being haunted! 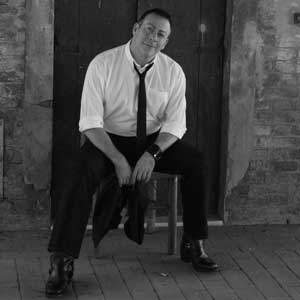 He is also an award-winning Young Adult writer, titles including Colony and Bunker 10.  He has also written Father Figure, an adult’s novel based around the strange goings on of the Mackenzie Poltergeist. Jan is also the person behind the successful City of the Dead ghost walk tours in Edinburgh, which takes ‘victims’, sorry, visitors into the Black Mausoleum in Covenanter’s Prison in Greyfriars Kirkyard, lair of the Mackenzie Poltergeist.
Here, he talks to Spooky Isles about ghoulish Edinburgh, that notorious poltergeist and writing.

What drew you to Edinburgh’s murky past?
A happy accident.  I got a job as a ghost tour guide and tourists kept asking me questions I didn’t know the answers to.  So I figured I’d better learn.  And, in the process, discovered I loved history!
Which is the darkest tale the city has to offer?
It’s got unlimited horror stories, having stayed medieval long after the rest of Europe’s cities had cleaned up their act.  I’d have to plump for the torture methods used on witches. Or any of Edinburgh Council’s policies.
What are the latest antics of the Mackenzie poltergeist?
Aw, he never changes.  Still biting, scratching and knocking people out.  It’s been going on for so long now, we’ve stopped keeping records.
Any new thoughts on what you think the polt might be?
Indeed.  My novel Father Figure puts forward a really bizarre theory as to what it is, but I won’t spoil the surprise for anyone who wants to read it.
Did things get more active after that grave robbing incident in 2003, when two local lads broke into Mackenzie’s tomb and stole a skull?
They stayed about the same.  We don’t think the Poltergeist has much to do with George Mackenzie.  Most people don’t realize he’s named after the tomb (where the first attack happened) and not the man.
Can you tell us about the other City of the Dead tours ” Underground City of the Dead Ghost Tour” and “Double Dead”?
Underground City of the Dead goes into the South Bridge Vaults, where people used to live in the 19th century.  The Double Dead does the same, but takes in the graveyard too.  Double the scares!
What is the most popular of the tours?
The Double.  Why go to one haunted location when you can visit two?
How do you feel about the tales of copies of your book , The Ghost That Haunted Itself being haunted by the ghost that it’s about?
It’s a weird one, for sure and it still happens now and then.  Maybe Mackenzie gets annoyed with slow readers.  Nah.  I just don’t know…
Why did you write Father Figure, the fictionalised version of the Mackenzie phenomenon?
There were things I couldn’t put in the non fiction version, The Ghost That Haunted Itself, because they would have gotten us into trouble!  But if I insist Father Figure is fiction, I can deny everything. By the way, you can download it from the City of the Dead website for 99p.  Yes.  That’s a blatant plug.
What plans are there for new books, projects?
Just finished a teen book called Carnage, about 20 teenagers trapped in a zoo where all the animals have gotten loose.  It’s a lot of fun.  Most of them die.

The Spirits Of Stratton Farm, Inverness

Jay Hollis - 3 December 2021 0
JAY HOLLIS takes a look at the most haunted places to visit in the North London Borough of Barnet...

** Subscribe and we'll update you when we publish new articles about ghosts, horror and dark history! **
© Spooky Isles 2011-2021