RHEA SEREN PHILLIPS tells us everything you wanted to know about Werewolves of Wales!

“Even a man who is pure in heart and says his prayers by night, may become a wolf when the wolf bane blooms, and the autumn moon is bright” – The Wolf Man (1941)

Werewolves feature heavily in our fiction and media, some as rampaging beasts and others as tortured souls.

Being Human has created a surge of interest in humanising monsters and this can be seen through of the success of the new drama In the Flesh, and of course, Meyer’s series that has seen them removed them from our horror stories altogether.

However you choose to see them, people must wonder if these stories are just macabre fantasies or folklore that originated from some truth.

Are there actually a small collection of people among us who are just pretending to be human?

Wales is a country steeped in folklore from Merlin to fairy folk, with its thick wooded areas and isolated little villages it is an ideal habitat for the original wolf.

The werewolf from folklore is commonly perceived to be a man who transforms every full moon into a large wolf-like creature.

Said to be as large as a horse, no or a stub tail and exhibiting human-like qualities, an intelligence behind the snarl, the description leaves little room for romance.

There are other stereotypes that have evolved over the years, a human who exhibits canine behaviour, an affiliation with nature, but these have been twisted by fiction.

In fact, one of the first reported stories was of a French aristocrat in the 1700s, the man upon attempting to rape a gypsy woman was shapeshifted by her brother into a wolf form, minus a tail. He was later seen attacking a farmer before he then proceeded to run off into the woods never to be seen again.

The Welsh Werewolf has a ubiquitous place in Welsh history, an unidentified beast that has been running amok for the last hundred years or so. More reports were accounted during the 1700s but since few sightings have been mentioned, after all, how long can one man live? It is doubtful it is one person, more likely a family of people with the same defect, as families have remained in Wales for generations this isn’t so very hard to believe.

The first true accounts began back in 1790 and sparse reports have continued over the decades that still instil curiosity and anxiety amongst the population of Wales. One of the first accounts began on a dark night on a lone road between Denbigh and Wrexham. A two-horse carriage was attacked by a large beast. The creature attacked one of the horses and terrified passengers, who watched as the other horse struggled out of its bonds and galloped away pursued closely by the beast.

In 1791 the beast struck again, but this time he left behind a trail to follow. A local farmer and blacksmith followed a set of massive paw prints that had been left in the snow to a neighbouring farm. There they came across a scene of total carnage, blood decorated the snow-covered fields and as they continued to the centre of the farm they saw yet more destruction as the farmer’s dog lay dead, his throat severed.

Continuing to the farmhouse they came upon the farmer who, alive but shaken, told them about the beast with intelligent blue eyes that had set upon his farm the night before. The creature had failed to break down the farmhouse door before killing every creature in sight. Gangs of farmers and locals patrolled the area for many nights after but found only paw prints and the dead remains of live-stock.

Recent reports of a Welsh werewolf

One of the more recent and sinister reports is of a man living wild in the Carmarthenshire woods, reported in October 2010 by Wales Online, Rachel Misstears. Walkers had reported seeing a tin shack filled with food and clothes, and some locals had reported stolen milk and food from front steps and outbuildings during the harsh winter months.

Beast or not this man has continued to elude capture and seems content to live in the wilds near Amman Valley, stealing when needed. No one has seen more than a glimpse of him and he remains an unspoken odd occurrence in modern Wales. The Welsh Centre for Fortean Zoology, an organisation dedicated to the investigation of unknown and out of place animals briefly got involved, although nothing came from their investigation. But locals can’t help but feel unsettled by his animalistic presence in their community.

Fleeting glimpses can be attributed to lots of factors, drink or even fear and so it becomes the ramblings of an insane lunatic. But in Norfolk, 2006, a man driving home witnessed a large wolf-like creature casually eating a carcass by the side of the road. The beast looked up at the car. Its eyes were yellow and its fur was matted, the creature stood around a metre at the withers. The beast then continued to eat his meal after seeing no threat. The account made it sound as if the man could have stopped and petted the creature, albeit briefly, but instead he continued home shaken and terrified, a not so brief encounter.

Alive and on the prowl or not, the werewolf has sparked many fantastical stories among the people who live in Wales. For all you suspicious people out there, remember to stay inside on a full moon’s night. If you are unlucky enough to come across a werewolf in the wilds, you can safely bet that Bella’s Jacob won’t be hiding behind the snarl.

RHEA SEREN PHILLIPS lives in Camarthenshire, Wales. From home she manages Peregrine Editing, a bespoke poetry and editorial service. She is currently working on three novels, albeit infrequently. 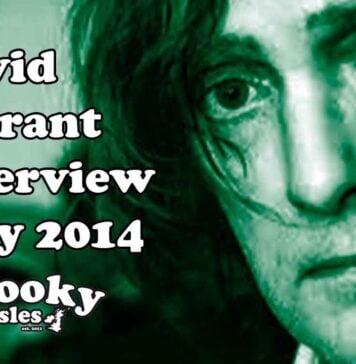