Haunted Edinburgh is world-famous for its spooky sites. MJ STEEL COLLINS looks at five haunted places in Auld Reekie!
Edinburgh, the Scottish capital, is regarded by some as the most haunted city in the world – probably a deserving reputation when you consider the amount of ghosts rumoured to walk its ancient, winding streets. Therefore, in a city where the dead very much do outnumber the living, here are just a few of the places you can take in.

By day, William ‘Deacon’ Brodie was a respectable type, the head of the Edinburgh Incorporation of Wrights and Masons, who repaired people’s locks. But he used this job to get doubles of his customers’ keys, who he would rob in the dark of night. Eventually he was caught and sentenced to hang. Brodie tried to worm his way out of it, but failed. His ghost is seen carrying a set of keys walking down the Close. He is kept company by a fire breathing, ominous, dark horse, and the wraith of Gen. Tom Dalzell. 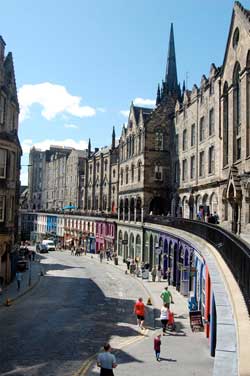 Following the execution of Major Thomas Weir, the Wizard of West Bow and his sister Grizel for witchcraft in 1670, Edinburgh residents were too scared to go near his former home at West Bow on account of devilish ghostly parties witnessed there. The Major himself was said to appear outside a top a headless black horse, riding off in a ball of fire. Strange lights and noises were reported coming from the house as late as 1825. One elderly couple took the house because of cheap rent, but only lasted one night. The partying wasn’t for them. The house was demolished in the 1800s, but the otherworldly capers have continued to be reported in Haunted Edinburgh.

A sizeable population of ghosts can be found here, including ghostly prisoners, a dog, a drummer and Janet Douglas, another unfortunate accused of witchcraft and burnt at the stake. Some parts of the castle are over 900 years old and have seen a fair bit. In 2001, a paranormal investigation was carried out, lasting ten days, and coming up with some interesting results to back up the stories. A sentry standing guard in 1960 heard strange drumming and went to investigate. On the battlements, he saw a headless figure that vanished on turning around.

Yet another haunted part of underground Edinburgh, described as one of its most haunted sites. The vaults are built into the structure of the South St Bridge and have been subject to several paranormal investigations, during the course of which, a hooded figure has been picked up, and also a an alien like face. The vaults are also thought to be haunted by ‘hauf hangit’ Maggie Dickson, a woman sentenced to hang for infanticide, but who survived. As she had already been hung, the sentence, by law, couldn’t be repeated and she lived the rest of her life as a land lady. The vaults also house a strange, cursed witches’ circle. Niddry St itself was the site of poltergeist activity during the 1990s.

Greyfriars Kirkyard is central to the spookiness of Haunted Edinburgh. Already famous for the Mackenzie Poltergeist, but probably little known for its other tales, White figures have been seen flitting about the gravestones, and the tomb of George Mackenzie himself was rumoured for generations to be haunted by his ghost, tormented at being buried right next to Covenanter’s Prison, where he sentenced hundreds to a nasty death. His coffin was said to move around of its own accord. Nowadays slightly superseded by events in the Black Mausoleum within the prison itself.bsp;

Thriller (S4, E5): A Killer In Every Corner REVIEW