SARAH BLAIR-DICKINSON continues her series about JK Rowling’s Harry Potter books with Harry Potter and the Order of the Phoenix. 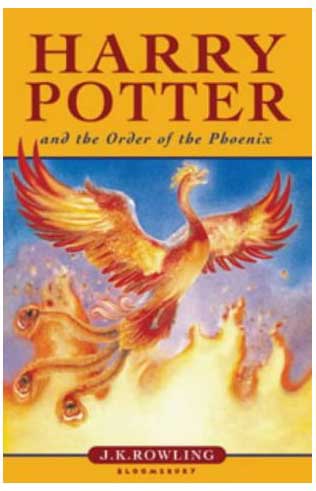 HARRY POTTER AND THE CHAMBER OF SECRETS IN 140 CHARACTERS:A group has formed against Voldemort and are hiding an important weapon. The Ministry chooses not to believe in Voldemort’s return and begin interfering at Hogwarts.
PLOT: Voldemort is back and Harry is stranded with the Dursleys all summer with no word from his friends.  He’s facing expulsion from Hogwarts, he’s ridiculed in the news and Dumbledore won’t talk to him.  On top of that, he’s not allowed to join the Order of the Phoenix.  Harry gets increasingly angrier and takes it out on his friends.  He soon starts a secret group of his own under the nose of the horrible new Defense Against the Dark Arts teacher and also finds himself a girlfriend to take his mind off the more sinister goings-on.

FUN FACT: Ron’s patronus is a Jack Russell terrier, which are known for chasing otters. Hermione’s patronus happens to be an otter.
SOMETHING TO SAY TO PRETEND YOU’VE READ IT: “Hem, hem.”

FILMED AS: Harry Potter and the Order of the Phoenix (2007)

SARAH’S VIEW: The one thing I constantly heard from people when reading this book was “Ugh, I hate this book because all Harry does is whinge and throw tantrums.” And it’s true, he does, but so what?  Harry is typically quite noble and I guess that’s what everyone is used to but I felt that this view of how Harry is really feeling is so honest and realistic. His friends have been keeping secrets from him, the Ministry is calling him a liar, his classmates think he’s delusional and he has only recently seen an innocent person killed that was supposed to be him. Wouldn’t you be in a bit of a bad mood if you were in his shoes?
Unfortunately Harry doesn’t have much to be happy about during his fifth year at Hogwarts.  He does get a girlfriend, but that (literally) ends in tears.  He’s also having very realistic dreams that he soon discovers he is sharing with Voldemort.  This results in Occlumency lessons – excruciating classes with his least favourite professor that are spent with Snape repeatedly breaking into Harry’s mind and seeing things he doesn’t want to share.
I found Order of the Phoenix to be the most heartbreaking of the lot because of the loss of a very dear friend.  It’s not the first death in the series and it’s definitely not the last, but it’s by far the greatest loss.  This was one of my favourite characters and someone that I think Harry truly needed in his life.  Every time I read it my heart gets broken all over again. Why, JK?  WHY??
WHAT I LOVE ABOUT THIS BOOK: The Weasley twins grand exit!
WHAT I HATE ABOUT THIS BOOK: Grawp. I found him to be a useless character and his storyline was dull and unnecessary.

FOLLOWED BY: Harry Potter and the Half Blood Prince.