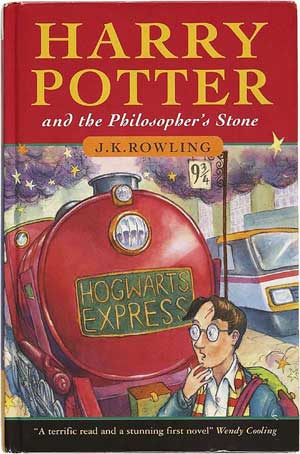 HARRY POTTER AND THE PHILOSOPHER’S STONE IN 140 CHARACTERS: A young boy finds out he’s a wizard and is whisked off to Hogwarts where he makes new friends but also a mortal enemy that he must defeat.
PLOT: Harry is an orphan and is being raised by his ‘normal’ aunt and uncle. Resentful and ashamed, the Dursley’s try their best to keep Harry down whilst their spoiled son Dudley uses him as a punching bag. On Harry’s 11th birthday, he gets a letter inviting him to attend Hogwarts School of Witchcraft and Wizardry where he can follow in his parent’s footsteps and learn to use his magical abilities. At school Harry meets new friends and confronts Voldemort for the very first time, though he’s not sure why this guy hates him so much…

FUN FACT: Harry Potter and the Philosopher’s Stone is so named in every country except for the United States where it’s known as Harry Potter and the Sorcerer’s Stone.
SOMETHING TO SAY TO PRETEND YOU’VE READ IT: “I’d like to think I’m smart enough to get into Ravenclaw, but I think the Sorting Hat may have other ideas.”

FILMED AS: Harry Potter and the Philosopher’s Stone in 2001.

SARAH’S VIEW:
You’ve probably heard of this book already; maybe even read it. More than likely you already know Harry’s story.
The book begins with the Dursley’s, happily going about their normal lives. Suddenly strange things occur—the Dursley’s do not like strange things. Something big has happened, but they don’t know what it is yet. Then late at night an old wizard by the name of Dumbledore is leaving their baby orphaned nephew, Harry, on their doorstep with only a letter of explanation. Fast forward 10 years and we find Harry has grown into a skinny, geeky kid in hand-me-down clothes. I immediately fell in love with Harry. He’s shy, he’s awkward, he’s self-conscious—not your typical hero. I found one of his most endearing traits is that despite a childhood of being shoved in cupboards, beaten up by his oaf of a cousin and generally treated with disgust and neglect, he remains hopeful and happy instead of becoming bitter and angry.
On his 11th birthday, Harry receives a letter inviting him to attend Hogwarts School of Witchcraft and Wizardry. (Oh yeah, Harry’s a wizard.) Upon arriving at Hogwarts, he finds that he’s a bit of a celebrity as everyone seems to everything about him from how his parents died to the scar on his forehead. Despite this, he quickly settles into magical life and is eager to start practicing magic and hopefully to learn something about his own background.
WHAT I LOVE ABOUT THIS BOOK: It’s a dream come true! What kid doesn’t want to believe that they’re special and they can leave their mundane life and move on to greater things? Okay, so I wasn’t raised by the Dursley’s and was actually quite a happy kid, but I still would have dug Hogwarts.
WHAT I HATE ABOUT THIS BOOK: Nothing. It’s perfect.

FOLLOWED BY: Harry Potter and the Chamber of Secrets