What sparked your interest in the paranormal?
I grew up in St Andrews in Fife, home of the Scottish Church headquarters for centuries and the centre of the religious battles and the reformation. In a town with such a long and brutal history, there are numerous tales of the paranormal attached to the ancient ruins, and so I started to hear about the ghosts from a young age but my interest as really ignited by my grandfather when I was a teenager. He was a painter to trade, but was also a gold leaf specialist, and his expertise brought him into much demand in the local heritage buildings. He was involved in the restoration of buildings such as St Leonards Chapel in St Andrews and Falkland Palace, and while working on these projects he would hear stories of gory discoveries and ghostly experiences from the other staff and workers, and he would in turn pass these onto me.
Which ghost story or haunting is a particular personal favourite?
I have had to think long and hard about this one, as there are so many great stories I have heard, but I keep coming back to the tale of the White Lady at St Andrews Cathedral. Although she is probably the best known spook in the town, there is a lot of facts behind the mystery, that are far less well known. Sightings of the ghost of the lady dressed in white, including long, white gloves, have been reported for centuries. Her figure always glides silently either through the Cathedral grounds or along the defensive walls until it reaches a certain watchtower, where she vanishes. The tower became known as the Haunted Tower with many townsfolk avoiding passing it after dark. In the late 1800’s, work started on the Cathedral to clear decades of dereliction to allow the ruins to be opened up for visitors to the town. The removal of the fallen stone and general waste resulted in ground levels being lowered and repairs were required to some of the stonework that was being re-exposed. This included the Haunted Tower. The stonemason working on the tower accidentally dislodged a stone, and a lower chamber was discovered. The exact contents of this chamber vary, but one thing is consistent, there were several bodies, all well preserved, and they included a young woman, dressed in white and wearing long gloves. This provided validation for the sightings of the ghosts, and those in charge at the time appear to have taken various steps to avoid the discovery becoming public knowledge. The chamber was resealed, but opened again several time in the following decades, until the bodies were discovered to have vanished. Where they went remains a mystery, as does their identity. There were records dating back 200 years, and they had no mention of the tower being used as a burial chamber and although there was a plaque on the wall, it was too badly eroded to be read.


There is much speculation as to who the White Lady is. Some believe she was [one of] a number of plague victims, sealed within the tower (possibly alive) in an attempt to stop the spread of the disease. Others say she was one the Mary Queen of Scots four Maries. Whoever she was, the story still fascinates me as the ghost sightings started long before the discovery of the bodies, and although there are limited recordings of the inner chamber being opened, it is clear it must have been accessed several other times, but by whom? It would not have been an easy task, having to chisel a hole in a thick stonewall, and then reseal it without anyone noticing, so it must have been someone in authority or with influence to have been able to do so, but why was there so much secrecy? Those in power must have known something about why the bodies had been sealed in a chamber that was subsequently hidden and with reports of the White Lady still being seen, she appears determined that her secret will eventually be revealed.
As part of my research into the story for my new book ‘Supernatural St Andrews’, I was granted access to the chamber that had contained the bodies, and it was quite an experience standing in a tiny room that I knew had so much mystery surrounding it and that few people had ever entered before. 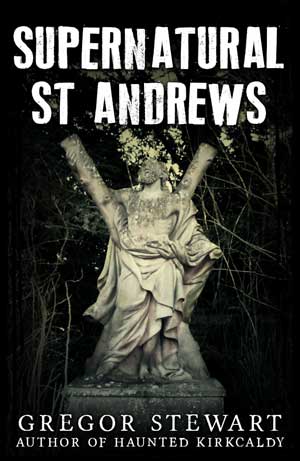 What motivates you to write?
I not only enjoy ghost stories, I am interested in the darker side of history and am passionate about old buildings. I often read stories that tell me that a certain location is haunted, but they don’t tell me why and that is not enough for me. I want to know why somewhere is haunted, what happened, who the ghost is and why would a spirit opt to remain there. I have always believed that the truth lies in the history, and I enjoy researching this as much as hearing the ghost story. For some locations this is relatively straight forward, but for others it is not and it can be amazing the details you can find by trawling through old records, and it is very satisfying to be able to piece together the facts to find the true story behind the hauntings.
Have you had any interesting experiences investigating hauntings?
Since I first became interested in the paranormal, I have described myself as an open minded sceptic. I believed there was something there, something we do not yet understand, but I did not know what. I have recorded answers from disembodied voices to questions that I have asked, heard footsteps in empty buildings, heard doors slam where no doors remain, but I couldn’t 100% say it was a ghost, so remained sceptical. That all changed just a few weeks ago when I finally saw what I believe was a ghost for the first time. I had been on a historical tour run by a friend in the fishing village of Pittenweem in Fife. He is a witch historian and tells the tale of the witch trials that took place there. The group was quite large and became splintered on the way back to the towns’ tower, which was at the centre of the witch trials. I went ahead to catch up with those in front and as I passed the gate to the churchyard, I saw someone standing at the entrance to the tower. Knowing that some of the visitors had torches to return, I shone my torch towards with the intention to go and collect the torch, but as I did so, they vanished! It turned out that a lady on the same tour also saw a similar figure around the same time walking towards a gravestone, where they vanished, and a couple of weeks prior the tour group had begun to express concern about where the elderly man on the tour had gone as he suddenly was no longer with the group. There had however been no men on the tour.
I do still have a sceptical mind, and I do still look for logical answers to anything unexplained, but I do now believe in ghosts!
Finally, on your blog, you mention Cyril the haunted doll – anything interesting happening with him?
Cyril is proving to be quite interesting! I had started to be asked to do more and more talks on my writing, and was keen to have a ‘prop’ to grab the audience’s attention. Being sceptical, it took me a long time to find Cyril. I wanted a doll that had some form of documentation with it to verify the story. Cyril had come from a deceased estate, and was passed onto the granddaughter of the original owner, but she did not like the doll and insisted it made noises and would move. He was passed onto a group of Psychic Mediums who studied him for 6 months, and I acquired the doll from them. They advised the doll contained the spirit of a drayman named Cyril (the occupation ties in as the house he came from was a former coaching inn). He had seemingly passed when he was around 40 years old and was, and remained, very angry. Once I got him, I started to do some sessions with an EMF meter, and was surprised by the results. I asked questions such as ‘is your name Cyril’ and ‘were you a drayman in life’ with the request that the meter was lit once for yes, twice for no, and the responses matched the information I had been given. To rule out the possibility of coincidence, I repeated the same questions but changed it to once for no and twice for yes, and again the answers remained the same. I have recorded these experiments and they can be viewed on my blog.
I recently took Cyril (along with another Doll I have named Tiny Tim) to a talk I was doing at a local college. I keep the dolls in sealed glass jars and, when I took Cyril out some of the students began to complain for having sore heads and necks. One of the tutors also reported experiencing the same thing. I had intended to do a live EMF session with the students, but the tutor was uncomfortable with allowing this given how both she and some of the students were feeling, and so she asked me not to proceed. Once I placed Cyril back in his jar, everyone felt fine. I had another talk to do with another class afterwards, and that time I was asked not to even take him out of his jar! I will continue researching both dolls as and when time allows, and the results will be posted on my blog.