Have you ever woken from sleep n the middle of the night, tried to turn your head to look at the time, or reach for a glass of water, then realised you can’t? Your head won’t move, your arms and legs won’t move, you can’t scream or shout for help. You feel as though you’re being pinned to the bed. Your body is paralysed. You can hear a voice or growling, you KNOW there is something evil in the room with you, and the worst part is that It’s not a dream, it’s REALLY happening.

This is a phenomena known as “sleep paralysis”.

It is a centuries old, worldwide occurrence with surveys reporting that it can affect up to 60% of the population.
There are many different interpretations of sleep paralysis and its causes, ranging from alien abduction to the “Old Hag” to being related to a migraine.

In the UK, in the “old days”, sleep paralysis was widely blamed on the work of demons or “incubus/succubus” or Old Hag.

In Old English language, the word “mare” would refer to these beings, hence the word “nightmare”.

The sleeper would awaken, frozen and paralysed, believing that the incubi is sitting on their chest, pushing them into the bed, even choking the victim.

Many sufferers report that having the overwhelming feeling that the “entity” wants to kill them, making the episode even more horrific. The Old Hag is one of the most common visions, the sufferer believes a wretched old witch is sitting on their chest, choking the life out of them.

In science, sleep paralysis is seen as a harmless if inconvenient issue, when the body enters the REM stage of sleep, the body’s muscles become inhibited for a short period of time whilst dreaming, but our brain awakens.
The sufferer will awaken fully after a short time and regain all movement.

As usual, it can easily be explained away by science, but I’m sure if you ask the millions who suffer from it and the “visions” that accompany it, they will tell you that it is a very real and terrifying experience and dread going to sleep at night, for fear of another visit from the Old Hag.

Here’s what a friend of mine says about her own Night Terrors:

“The worst part of a night terror for me is the overwhelming feeling of panic, as you realise that it’s happening again and until it’s over, there’s not a god damn thing you can do about it.

“I have suffered these night ‘visits’ for over 20 years now, at about three-monthly intervals, which seems to be just long enough for me to forget how terrifying they are when they strike. My particular night terror follows the same pattern every time.

“First I awake from a restless sleep like I’ve had a nightmare that I can’t remember, but in a panic I suddenly realise I can’t move anything, I’m totally paralysed yet fully alert.

“Only my eyes seem to work properly … I can’t even make a sound.

“Soon the shadow appears, always at the edge of my vision, near the bedroom door, it kind of looks like a tall man in a ‘straw’ type hat, but as I can’t ever get a good look I can’t be sure.

“Next up is the high pitch ‘squealing’ noise, almost like a kettle boiling somewhere in the distance.

“After the squealing builds to a crescendo and seems to fill my entire head with it’s noise there’s a couple of ‘flashes’, like a camera flash going off…and then it’s over.

“In an instant I’m up, shaking, sweating, usually both scared and angry. Scared because it most definitely feels like an intrusion … a violation of my sleep. … and angry because I’m not bloody well 10 years old any more and shouldn’t have to deal with this kind of thing.

“The ‘hat-man’ figure never just fades away like in some ‘night terror’ reports I’ve read … he’s just ‘gone’ in an instant, as is the sound in my head.”

Is St Barts in London, Britain’s most haunted church? 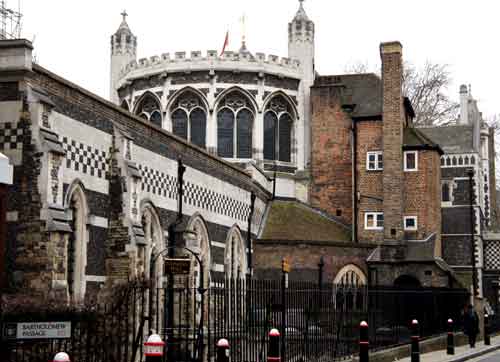