Anyone who has ever visited the Fens, or travelled across it, can attest to its unique eeriness.

The horizons that never end, a landscape interspersed with sparsely populated villages and hamlets.

The Fens have only been accessible by road comparatively recently – before the great Fen drainage of the eighteenth century, the landscape was a collection of water channels and marshland, villages clinging to high ground, and Ely was an island.

Nowadays, the ancient cathedral looks across miles of the finest arable land in Britain; but when the autumn mists lift off the slow-moving rivers and drift across the fields, it is easy to picture the peatlands, and to people them again with spectres.

A phantom barge has often been reported drifting along the Little Ouse River on misty evenings towards Ely.

It’s spectral crew is a group of monks who chant hymns as they gather around an open coffin in which lies the shrouded of a woman.

The corpse is believed to be that of St Withburga. She founded a nunnery at East Dereham in AD 654 and was buried in the churchyard there when she died.
In 974, the Abbot of Ely ordered his monks to steal her body and bring it to Ely, hoping that her new resting place would attract pilgrims who might contribute to the abbey’s income.

Tradition has it that his plan backfired when a spring of healing water gushed forth from her empty grave, causing so many miraculous cures that pilgrims continued to flock to Dereham for years afterwards.

Another tale which illustrates the traditional distrust felt by Fenmen towards the clergy who betrayed their trust, tells how the Bulldog Bridge, connecting Littleport with Shippea Hill, got its name. 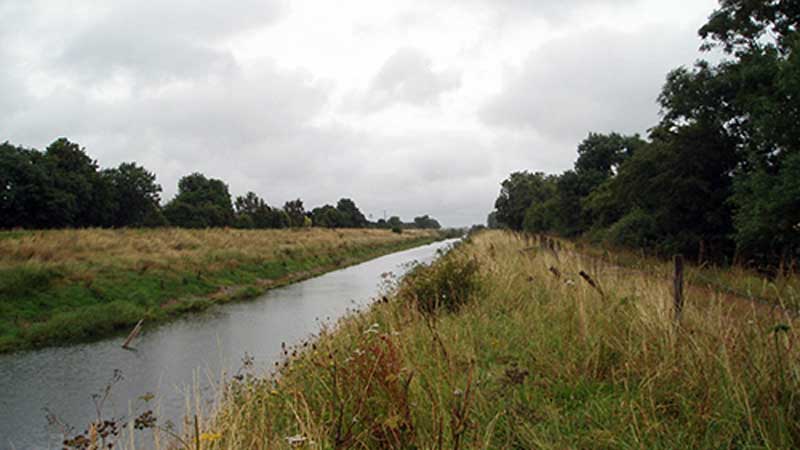 In the Middle Ages, a servant girls was sent by her mistress to pick sprigs of wild mint on the banks of the Red Mere, whose waters once covered the land to the East of Shippea Hill.

After gathering the mint, the girl set off for home but, feeling drowsy, sat down by the wayside and fell asleep.

Her rest was rudely broken when a passing friar leapt upon her and began to tear off her clothes.

Her resistance would have been useless, had it not been for the arrival of a large bulldog that dragged the friar off and mauled him to death.
With his dying breath, the man plunged his dagger into the chivalrous beast. Since then it has often been seen running across the bridge at dusk.