In 1650, Tom Cox, a poor coachman, was heading home down Water Lane when he saw a darkly dressed gent hailing him. Accepting one last fare for the night he picked-up the mysterious stranger who wished to be taken to St Bride’s Church in London.
When the coach had ratted down Fleet Street to its destination, the stranger turned to face Tom, his eyes ablaze. There in the churchyard the man transformed: growing over twice the height of any person.
Matted fur burst from his skin and his teeth elongated into jagged fangs. Finally a bear-like demon bore down on Tom Cox; who spurred by primal fear, lashed out at the creature with his whip. The beast roared diabolically, vanishing in a burst of flame.
What was the cause of this visitation?

It has been theorised that churches and temples are built over the top of earlier holy sites because the location itself is a nexus of spiritual energy. St Bride’s is particularly rich in holy sites: there has been temples and chapels on the same spot for 2000 years ?
The current church incorporates a Roman footpath, a Saxon undercroft, a medieval chapel, Christopher Wren’s tallest spire and following incendiary bombing in the Blitz, a 1950s
restoration.
A church boasting such a rich ecclesiastical history is bound to have a few skeletons in its closet? And I’m not being metaphorical here! 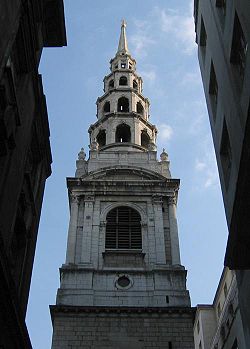 Bones, preserved from parishioners of the church’s various incarnations are painstakingly boxed and catalogued in St Bride’s ossuary. Because the church traditionally buried its dead in lead coffins clearly labeling the name, date and cause of death, this collection is a resource to archaeologists and medical students alike.
Just as striking is the adjoining charnel house where ancient parishioners are interred as piles of skulls and long-bones. This is where the “skull and crossbone” originates: In London, cramped churchyards were overflowing with the dead by the medieval period. To create space, skeletons were routinely “consolidated”, leaving only the skull and two long-bones.
Perhaps the concentrated energy of the souls interred here have weakened the barriers between this world and the next? Allowing creatures like Tom Cox’s Bear Demon to cross through to this earthy plane?