Sandwood Bay in Cape Wrath, Sutherland, is one of the most northerly points of the Scottish Highlands. It’s an isolated spot, a four mile walk from the nearest car park at Blairmore hamlet. Beyond the bay’s sea stack Am Buachaille, next stop is the USA.

Legend has it that before the construction of the lighthouse in Cape Wrath in 1828 shipwrecks were a regular occurrence at Sandwood Bay, giving it the reputation as a ‘shipwreck graveyard’. The immense loss of life associated with these tragedies has given rise to several tales of ghostly sailors in the area.

Ruined Sandwood Bay Cottage, sandwiched between the beach and Loch Sandwood, is the main location for many of the stories. Traditionally, the story is that on stormy nights, inhabitants of the cottage would be woken up by a ghostly sailor hammering on the windows. Prior to it falling into ruin, the cottage was used as a bothy by men working in the area. 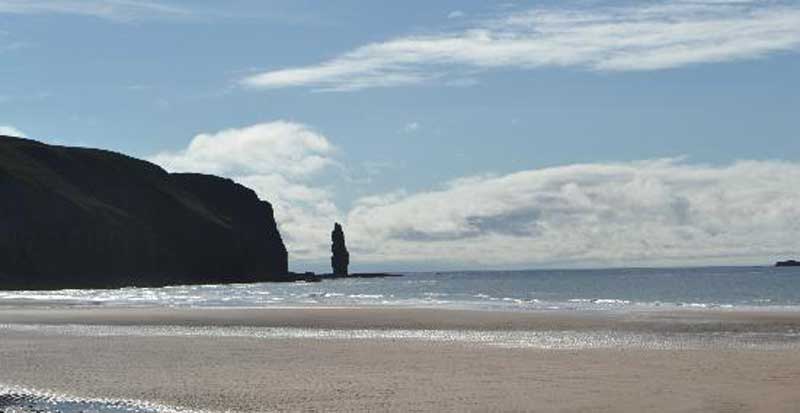 One such individual was an old fisherman passing the night after helping a friend gather sheep on Sandwood Bay. Just after he nodded off, the old man was awoken by his dog barking and heard footsteps approach the cottage. He saw the unfamiliar face of a bearded old sailor looking in, but when the fisherman went to see what was up, the sailor had gone. The fisherman decided against staying in the cottage again after waking up another night to feel an ominous presence press down on him.

In 1967, two English tourists were looking out to sea via their binoculars at Cape Wrath, when they spotted a strange, tall male standing by the cottage. Rather intrigued, the women went to investigate, but when they reached the cottage, the enigmatic figure had vanished. Locals later told them that they had probably seen ‘the ghostie’.

The strange happenings associated with Sandwood Bay Cottage travelled to Edinburgh when a woman living there was sent a splinter from the cottage’s broken banister. Soon, the mayhem of a poltergeist descended on her house, and she saw the eerie figure of an old sea dog in the living room. The activity ended when she locked the splinter up in a drawer.

However, people have encountered the strange sailor apparitions away from the cottage. A fishing party from the nearby town of Kinlochbervie sailed past Sandwood Bay and saw a large man in sailing attire standing on the dunes, staring out to sea. A ghillie from the party went to investigate, thinking it was a poacher. However, when he reached the spot where the man was spotted, he was perplexed to find nobody there – and no footprints to indicate the strange figure that had stood there.

Perhaps the most hair raising was the experience of a father and son who took their pony to collect firewood. They had ventured further than usual, winding up in Sandwood Bay, where they spent hours gathering up driftwood and other debris. Their normally placid pony gave a start, and to the men’s shock, they saw a huge man in sailing clothes standing beside them, apparently coming from nowhere. The man was not best pleased, telling the father and son to ‘take their hands off what did not belong to them and leave his property’. They dropped every single piece of firewood and fled, scared by the sailor’s sudden appearance and the unearthly air about him.

30 October 2017 0
Do you dare spend a night with Vincent Price in the Madhouse? PETER FULLER shares 13 fun facts about the 1974 classic.
Read more
Load more