JASON HOLLIS says many hauntings in Enfield deserve attention, not just its famous poltergeist
Despite my previous article, Why I Believe in the Enfield Poltergeist, I do not like writing about or discussing that case. Don’t get me wrong, it is an interesting case but it has hogged the limelight for so long that Enfield’s other haunted locations and ghost stories have been either ignored or forgotten and that’s a shame – because there are lots of them.
The London Borough of Enfield is full of haunted locations but only a few have been featured in books. Richard Jones’ Walking Haunted London featured more Enfield ghosts in one chapter than I had previously read but I had been aware of others since childhood and wanted to read about those too. That’s when I decided to write about them for myself. Well, nobody else was going to do it!


My fascination for ghosts began in childhood and knowing this, my parents always made sure they passed on any local stories they came across in the local newspapers. It was thus that I became aware of the haunted first floor landing at Forty Hall, a 17th century country house, and the mild poltergeist activity that had been happening at the Royal British Legion club on Holtwhites Hill. This building is a former fire station built in 1936 and is believed to be haunted by a fireman who had been crushed to death by a fire engine. Another Enfield story that I first learnt about as a child was the phantom horse-drawn coach that haunts Bell Lane, probably the most famous Enfield ghost after the Poltergeist. 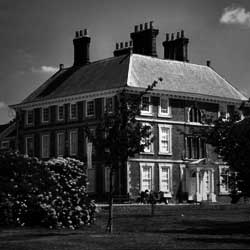 Enfield has its fair share of haunted pubs too and I knew about some of them long before I was old enough to frequent them. The Crown and Horseshoes was probably the first to come to my attention. It was featured in a newspaper article in the mid 1970’s and is thought to be haunted by an elderly lady. The King and Tinker is rumoured to be haunted by a little girl, while the poltergeist activity that regularly occurs at The Hop Poles is blamed on the ghost of an old pot boy who was killed in a road accident outside the pub. A similar story concerns The George, in Enfield Town. I am doubtful of the claims that Dick Turpin’s ghost haunts the Rose and Crown, although he does have a genuine connection to the pub, as his grandfather once owned it. However, the pub is also rumoured to be haunted by a friendly woman and a cavalier.
Many of the large country houses that were built in and around Enfield are still standing and most of them have their own ghostly residents. Forty Hall, Myddelton House, Capel Manor, Southgate House, and North Lodge are all explored in Haunted Enfield, as is Trent Park. This is the scene of a remarkable apparition. Originally an eighteenth century building, it was drastically remodelled in the 1920’s by Sir Philip Sassoon, who had the levels of the first and second floors raised. However, the resident Grey Lady continues to walk along the old floor level. She was once seen by a petrified security guard in the second floor corridor. He fled down the stairs when he saw her from the chest up, emerging from the floor, only to see her bottom half seemingly suspended from the ceiling as he ran along the first floor to continue his escape.
So, as you can see, the Enfield Poltergeist is not alone and neither will you be if you choose to visit some of Enfield’s haunted places.

JASON HOLLIS is a paranormal investigator and researcher with the North London Paranormal Investigations (NLPI) team. He was born in the London Borough of Enfield and lived there for over thirty years before moving to Hertfordshire where he now lives with his wife and children. His lifelong interest in the supernatural led him to research and write about Enfield’s ghosts. Haunted Enfield, his first book, brings together for the first time all of the stories, legends and documented evidence of the supernatural from around the Borough into one volume.