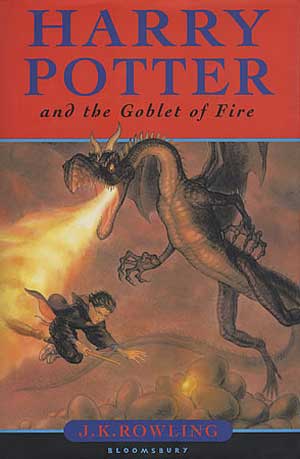 HARRY POTTER AND THE CHAMBER OF SECRETS IN 140 CHARACTERS: Three young wizards are chosen to compete in a tournament and Harry finds that someone has entered him in the hope that he won’t survive.
PLOT: The Triwizard Tournament is taking place and Hogwarts is playing host to two other wizarding schools so they can enter students into the competition. Harry finds himself one of the contestants, but doesn’t know how he was entered and it seems that whoever did enter his name was hoping to see Harry get killed in one of the dangerous tasks. He doesn’t want to compete, but he has no choice. At the end of the tournament Harry discovers who entered him and why – it’s more horrifying that anything he imagined and threatens the entire wizarding world.

FUN FACT: The wizarding world boasts eleven schools around the world where young wizards and witches can learn magic.
SOMETHING TO SAY TO PRETEND YOU’VE READ IT: “It’s not spew, it’s S.P.E.W.!”

FILMED AS: Harry Potter and the Goblet of Fire

SARAH’S VIEW: Poor Harry… someone’s always out to get him and this year is no exception.  Harry finds himself entered into a competition that he’s not technically allowed to be in and is forced to compete against older kids in a tournament that tests not only his magical abilities but also his friendships and his loyalty.
I love the complexity of this book in the series as we have so many things happening on the sidelines.  I love Hermione’s attempt to stand up for the rights of the house elves, despite the fact they don’t want to be stood up for.  Also, Fred and George are up to something huge that isn’t revealed until the end of the book.  A strong theme I noticed in this novel is unity – we have three schools coming together for the tournament and having to learn to live with each other, Voldemort’s band of followers are reforming, new relationships are beginning and perhaps the scariest thing of all:  Harry has to think about girls and worry about who he will ask to be his date to the Yule Ball.
The emotion in the last couple of chapters is almost palpable.  We see the true horror of Voldemort in this book as opposed to the threat of him in the first few books.  Also, the first of many deaths happens and it comes as quite a shock.  I actually felt the fear, pain and exhaustion of Harry when he’s recovering from the tournament.
Despite the terrifying events that occur, it ends on a happy note – Harry shows his true colours by presenting the twins with a gift that will change their lives.
WHAT I LOVE ABOUT THIS BOOK: The beginning of Weasley’s Wizard Wheezes.
WHAT I HATE ABOUT THIS BOOK: The mermaids.  I like to think of mermaids as beautiful, not ugly and screeching.

FOLLOWED BY: Harry Potter and the Order of the Phoenix