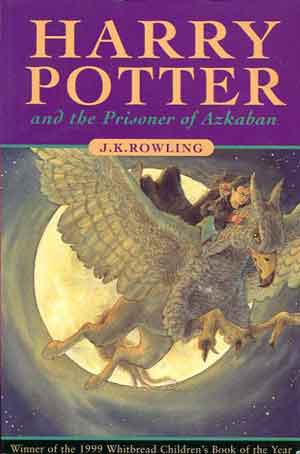 HARRY POTTER AND THE PRISONER OF AZKABAN IN 140 CHARACTERS: A dangerous convict has escaped from the wizard prison and is on the loose.  Half-crazed and fixed on revenge, Sirius Black is after Harry.
PLOT:  Harry’s every move is being watched in order to keep him safe from the escaped prisoner Sirius Black.  Azkaban prison guards are placed at the entrances to Hogwarts and Harry has a hard time not passing out when in their presence.  A new professor helps Harry learn to control the Dementors effect but in the meantime, he has been banned from visiting Hogsmeade at weekends.  A magical map is given to Harry which gives him a sneaky view of Hogwarts.  This year Hermione has a secret and she and Harry use it to save the lives of innocent friends.

FUN FACT: Chocolate has the ability to calm the nerves and revive one from the symptoms of depression.  This is an excellent excuse to eat chocolate every day.
SOMETHING TO SAY TO PRETEND YOU’VE READ IT: “What shape would your animagus take?”

FILMED AS: Harry Potter and the Prisoner of Azkaban (2004)

SARAH’S VIEW:The third book in the series marks a major turning point for Harry.  Poor Harry was too young to remember his parents and ended up growing up in a home with no love or acceptance of any kind and his only family was the hateful Dursley’s.  Since he’s been at Hogwarts, he’s made friends and finally felt a sense of belonging somewhere, but there is still an empty place for the family that he never knew.  Though Harry is terrified of the dementors placed at the school to protect the students from Sirius Black, there’s a small part of him that longs to be near them—when the cold creeps in and darkness starts to fall, Harry can hear his mother’s voice in her last moments. Though he’s terrified of the hooded dementors and their rattling breath, he longs to have that link with his mother.
When Ron is captured by the large black dog that has been plaguing Harry, he and Hermione follow it to its lair and find themselves face-to-face with Sirius Black himself.  What results after this meeting changes all of their lives.  Hermione reveals a secret she’s been keeping all year and with the aid of this they are able to save their friends from a horrible fate.  Whilst fighting off the dementors in the forest, Harry gets a glimpse of someone he thought he would never lay eyes on.  Harry learns a lot about himself and his father and finally feels that he has a true family.
WHAT I LOVE ABOUT THIS BOOK: Harry’s meeting with Prongs in the forest is a beautiful moment and though it’s fleeting, it shows Harry he’s not alone in this and that someone he thought was gone forever is still right there with him. This struck a personal chord with me and made me cry like a baby. I enjoyed the books before this one, but this scene is what made me fall in love with the whole series.
WHAT I HATE ABOUT THIS BOOK:  Divination classes.  I feel bored just reading about them.

FOLLOWED BY: Harry Potter and the Goblet of Fire