Banshee Labyrinth is one of Edinburgh’s oldest and most haunted pubs, so CHRIS NEWTON made a visit

Where is the Banshee Labyrinth?

Halfway down the cobbles of Niddry Street, in the heart of Edinburgh’s Old Town lies Scotland’s most haunted pub, The Banshee Labyrinth.

Within its subterranean maze are seven rooms, three bars, a live music venue, and even a free cinema where you can usually expect to see something by Tim Burton or Edgar Wright.

Half of the pub is built into Edinburgh’s underground vaults – a series of chambers within the arches of Edinburgh’s South Bridge.

Originally used as taverns and storage spaces, these vaults became home to the town’s destitute in the early 1800s.

Dank, windowless caverns for the homeless, the prostitutes and the criminals, where the legendary body snatchers Burke and Hare are said to have frequented during their nefarious heyday.

After being bricked up for a century, the vaults were rediscovered in the 1980s and, since then, have become notorious for the ghosts which still wander its black tunnels.

‘The Watcher’ haunts The Banshee Labyrinth

Most notably an entity known as ‘The Watcher’, a man in a long black coat with a tricorn hat and large boots.

Those who have seen him up claim say that, beneath the brim of his hat, he has no facial features whatsoever.

When the pub now known as The Banshee Labyrinth was renovating one of the vaults for storage space, a workman described seeing a woman in a long, old fashioned grey dress.

She had long red hair but covered her face with her hands as she sobbed.

He received no reply, and the woman merely continued to cry, before removing her hands to reveal a pale, gaunt face with cracked, rotten teeth.

It was then that she shrieked; an awful bloodcurdling howl which caused the workman to blackout in terror. When he came to, she was gone.

By the time he was safely home and nursing a stiff whiskey he received a phone call informing him that a family member had died.

He realised that the spectre he had seen in the vaults was a banshee, a spirit from Irish Mythology whose screams are said to herald the death of a relative.

Edinburgh’s Banshee has not screamed since but has been known to sing down in the blackness of those haunted tunnels and has occasionally hurled objects at some of the tourists taking tours of the vaults.

But the Banshee Labyrinth is far from pub’s only resident spirit. The main bar area is said to be haunted by a six-year-old girl called Molly, who disappeared in 1841. An old chimney in the building was said to be her burial site, and when it was bricked up, a child’s shoe with the name ‘Molly’ inscribed upon it fell out.

Beware ‘Ole Jock’ in the ladies…

On the opposite side of the bar, there have been many reports of paranormal activity in the ladies’ toilets, where a spirit known as ‘Ole Jock’ reputedly slams doors and turns the hand dryers on and off.

He is known for his fondness of pretty young girls, with many women reporting seeing his shadow looming over the doorway, hearing ghostly feet dragging across the floor, feeling his breath on the back of their necks, and some even claim to have been attacked.

Many of Edinburgh’s ghost walks end by entering The Banshee Labyrinth directly from the vaults, with patrons given a token for a free drink – which is just as well, because when you’ve been down there, you’ll need one.

Have you been to The Banshee Labyrinth? Tell us in the comments section if you’ve seen anything strange there! 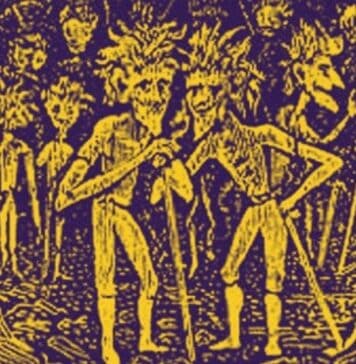