PAUL MOYNIHAN looks at Wexford’s answer to the Enfield Poltergeist, the horror of a haunting in historic Enniscorthy.

The historic town of Enniscorthy is situated in the centre of County Wexford, also known as Ireland’s ‘Sunny South-East’.

Dating back to 510 AD when it was founded by St. Senan, the town is famous for being the site of many a historic event, including the battle of Vinegar Hill which took place during the 1798 Rebellion.

A museum commemorating this event now stands in the town. Beyond the many tourist attractions, however, a darker secret lies; a tale of terror, fear and things that quite literally go bump in the night.

This is the tale of the Enniscorthy poltergeist.

What is the Enniscorthy Poltergeist all about?

In the year 1910, a man named Redmond lived in a house on Enniscorthy’s Court Street. Redmond and his wife lived a steady life, taking in lodgers to add to their comfortable finances.

On the occasion during which our story takes place, the Redmonds had three lodgers staying with them.

These three men shared a room which was situated above the kitchen.

The room had two beds, and was quite large.

One of the men, John Randall, came to Enniscorthy to work as a carpenter in early July 1910. His experiences in the room on Court Street would be enough to drive other men insane.

His three week stay with the Redmonds was a nightmarish one, resulting in Randall’s dramatic loss of almost a stone in weight.

The first incident of the Enniscorthy Poltergeist

The first incident that took place was on the 7th of July, as Randall lay in bed.

All of a sudden, the bedclothes were pulled from Randall’s bed. He believed it to be the trickery of his roommates, and told them to stop.

The two men explained that it was not a prank, and so they lit a match to discover the answer to this strange occurrence.

Randall’s bedclothes were found by the window, his companions adamant that they played no part in what had happened.

The three men returned to their beds, and attempted to meet slumber once more.

However, it wasn’t long into the night when more strange phenomena began to take place. 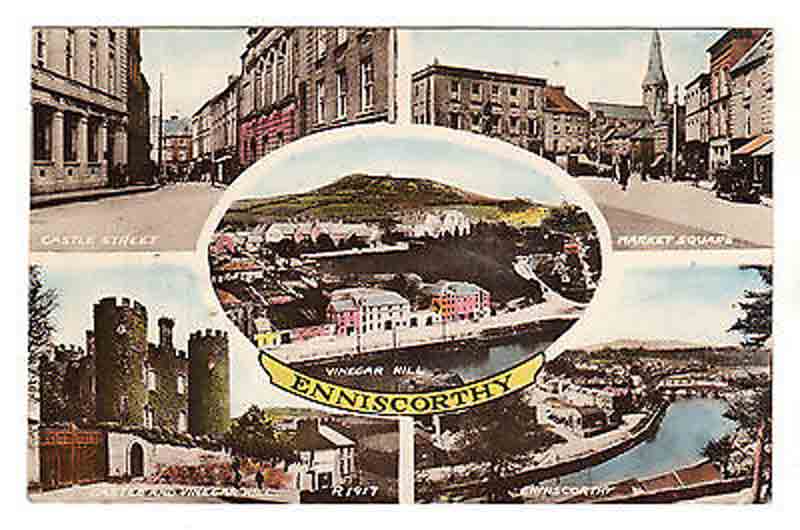 A loud tapping noise was heard in the room, increasing in speed.

As the speed of the tapping reached a crescendo, the bed shared by Randall’s companions suddenly moved across the room.

A lamp was immediately lit by the frightened lodgers, in hope of finding some logical explanation.

Alas, none was found. Redmond was summoned to the room, who believed it to be each man tricking the other.

He instructed the men to put the bed back where it originally had been, and returned to his own. Randall, in a terrified state, refused to sleep alone in his own bed.

He insisted he share with his companions, and as the three of them settled down to get some rest, the bed once again moved to the middle of the room.

The lodgers immediately jumped from the bed, frightened and shocked.

They agreed that it would be a wise choice to sit awake until daylight.

Footsteps were heard throughout the house, which lasted the duration of the night. These phantom footsteps returned the following night.

Strange paranormal phenomena took place practically every night for the remainder of the lodgers’ stay.

On the night of Monday the 11th of July, the bed again began to move around the room with its three occupants lying in it.

A chair began to rock frantically into the middle of the floor, much to the shock of the three men.

Over the course of the following nights, this poltergeist phenomena continued and heightened when one of the lodgers was lifted from the bed by unseen hands.

Randall claimed in a signed statement to Professor Barrett of the Society for Psychical Research that on Friday the 29th of July, the bed turned on one side, sending the lodgers crashing to the floor.

Before this happened, the poltergeist hinted that something was coming by pulling the pillow from under Randall’s head a number of times.

The strangest factor of this event is that the bed seemingly made no noise as it landed back in place. It wasn’t long before three lodgers became two, one of the terrified men unable to take it any longer.

The newspaper attends to report on the poltergeist

The Guardian newspaper soon heard of the strange and seemingly supernatural events taking place in the house on Court Street, and sent a man named Murphy to see what all the commotion was about.

He was joined by a man named Devereux, and before keeping vigil in the haunted room, they began a full investigation of the goings-on in the hopes of discovering some form of trickery.

They sat between the two beds, giving them a full view of the room, with one lodger in each of the two beds.

Murphy noted that at a time close to midnight, a rapping could be heard coming from the direction of Randall’s bed.

Devereux claimed it resembled the sound of a rat chewing on wood.

The noise soon increased in both speed and volume, lasting for five minutes before coming to an abrupt end. Suddenly, the bedclothes began to be pulled from Randall’s bed.

They appeared to be descending under the bed, before resting gently on the floor.

Murphy and Devereux were dumbfounded, as no sign of wires or fraud of any kind was found. Something genuinely terrifying appeared to be occurring in this room.

Events increased in strangeness as the night continued, with further noises coming from Randall’s bed.

Randall himself was pulled from the bed at one stage, much to the awe of the investigators.

This was the final straw for Randall and his fellow lodger. Both men returned to their homes the very next day.

Murphy concluded that neither of the men played any part in the events that took place during his investigation in the room.

The tale of the poltergeist of Enniscorthy is a chilling one.

It is one of Ireland’s most spine-tingling accounts of a troublesome spirit displaying its powers to the astonishment of those unlucky enough to experience it.

Randall and his companions were brave men to last as long as they did, and their story will live on as one of Ireland’s scariest.

Next time you hear a strange noise at the foot of your bed, pray it’s just a rat chewing on the bed-knob. Sleep well…