CHRISTINE MILLER takes a look at the fourth episode of Great British Ghosts centred on the Galleries of Justice, Nottingham, and the Viaduct Tavern, London

Once again Michaela Strachan is on the hunt for all things paranormal and spooky, and in this episode she visits Nottingham’s Galleries of Justice and London’s Viaduct Tavern; both of which have a reputation for being very, very haunted.

The Galleries of Justice

The Galleries of Justice was in use from 1780 until 1986. Paranormal investigator Chris Arnold takes Michaela on a tour of the building and tells her that a variety of visitors have witnessed similar activity at different times – mostly black shadows which flirt around the main gallery of the building. Chris himself witnessed unexplained flashing light there that were ‘almost like a firework effect’, he recalls. Screams, moans and sighs have all been heard on site also.

It seems clear that a lot of despair still lingers here.

In 1799, a public dissection was scheduled with the aim of acting as a deterrent, but it proved to be a bit too popular, as the public saw it as an entertaining day out to be had instead!

In the county jail underneath the main building, men and women were thrown together to complete their sentences. Michaela tells us that the oldest cells date from medieval times, and the conditions, even just a century ago, would have been nothing short of appalling. Three inmates were allocated to a single cell, but when particularly busy, the jail would hold around 70 inmates between just twelve cells.

The female prisoners were expected to work in the laundry for a minimum of eight hours per day and in complete silence. This was due to the belief that conversing was thought to promote criminal activity. While in the laundry room, the tour guide tells Michaela that he has walked through the area more than once only to find that various items in the area were actually shaking by themselves, with no logical explanation.

Moving to the ‘dark cells’, Michaela is clearly shocked to discover that those who were unable to pay for the previous cells, that in hindsight now seem relatively quite plush, prisoners would have to stay in one of the pits – basically a horrifically claustrophobic hole in the ground, locked overhead with a metal gate. This was common practice in the jail up to the 18th century – some unfortunates would have to spend a month or even two in these conditions before being transported to Australia.

The solitary confinement cell is popular with paranormal groups, many of whom aim to attempt to bunk in the cell for as long as possible. However, Michaela’s guide explains that no one has lasted longer than around ten minutes in this part of the building alone.

Next, the pair venture to the exercise yard; supposedly the most paranormally active site of them all. This is probably not surprising seeing as it doubled up as the gallows at one time. The guide explains that he has witnessed a male figure walk across the yard, dressed in what he describes as a ‘jailer’s outfit’. Apparently, this gentleman has been seen by quite a few people on separate occasions wandering throughout the exercise yard.

Further underground in the building, it is perhaps somewhat surprising that there is a chapel area which looks rather sinister and foreboding. This part of the Galleries of Justice is where strange chanting has been heard and numerous groups investigating this particular area have had stones thrown at them. The stones have even been allegedly thrown on command.

Michaela’s second stop is to the Viaduct Tavern in London, a former gin palace which is rich with history.

Michaela meets with well-respected historian Richard Jones who talks her through some of the spirits that haunt the building. Most, but not all of the activity is limited to the cellar area. Chillingly, when in the cellar one landlord heard a voice murmur to him, ‘it’s just us two down here now’.

One spooky event which did not take part in the cellar was in 1982, when the landlord’s daughter was tasked with the running of the pub for the day. On a quick break she decided to go upstairs to read a newspaper. Relaxing on the sofa, she soon heard footsteps come up the stairs, and then in quick succession, the door was opened, the newspaper then was violently snatched from her hands by an invisible force, only for the door to close again and the footsteps descended back down the stairs.

Richard takes Michaela to the ominous cellar area, where he explains that the building was once sandwiched between two prisons, one of which was the infamous Newgate Prison. According to Richard, psychic mediums have a particularly difficult time in this area; many of them become sick and nauseous, and develop an intense feeling of hopelessness and despair.

Have you visited the Galleries of Justice in Nottingham, or the Viaduct Tavern in London and witnessed anything spooky? If so, let us know in the comments section below. 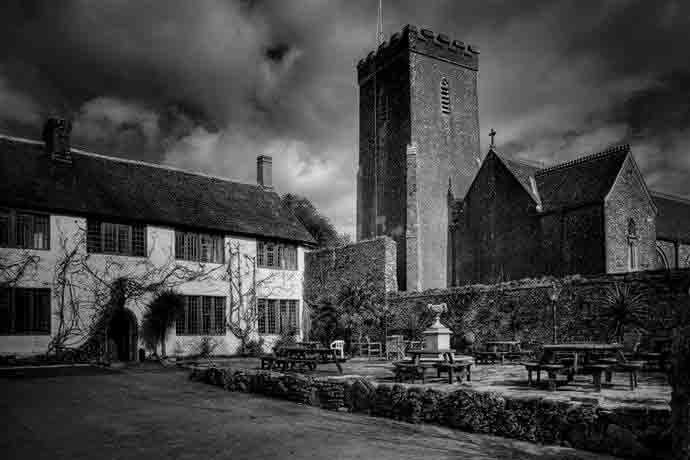