RICK HALE looks at the paranormal residents of Gwrych Castle, near Abergele in Conwy, Wales, which will soon play host to “I’m A Celebrity… Get Me Out Of Here”

Situated along the northern Welsh coast, in the market town of Abergale is Gwrych Castle.

A Grade I listed Gothic masterpiece that has stood silent and empty since the 1980s.

While this manor house may be better suited as the backdrop for tales of ghostly revenants or the bloodthirsty undead.

This castle, partially reclaimed by nature, is about to play host to the popular reality TV show, “I’m A Celebrity… Get Me Out Of Here.”

However, the cast and crew will have more than just the typical reality tv drama to contend with in this gloomy Welsh castle.

Gwrych Castle is known to be haunted by the lonely phantom of a long dead resident.

Unlike the ancient castles that dot the Welsh countryside, Gwrych Castle is a relative newcomer.

Construction of the castle began in 1810 and was overseen by Lloyd Hesketh Bamford, heir to the lords of Gwrych.

The ancestral home of the powerful family sat there for generations and Bamford added onto it making it the sprawling castle we see today.

When the Bamford Hesketh heiress, Countess Winifred married, the castle transferred into the possession of the Earls of Dundonald.

This is when the history of the castle became truly fascinating.

As the second world war raged across Europe, the castle was taken over as part of Operation Kindertransport.

Kindertransport was a little known operation by the British government that rescued over 10,000 Jewish children from Nazi occupied countries.

The castle itself housed over 200 tender aged refugees until Hitler and his regime of oppression was defeated.

Following the horrors of the world wide conflict, the castle was purchased in 1948 by Leslie Salts.

For 20 years the castle became a popular tourist attraction and became known as “The showplace of Wales”.

When Salts sold the castle in 1968, it was used as a center for medieval entertainment.

Audiences could thrill to authentic jousting tournaments while enjoying a hearty banquet meal.

All that changed in the mid 80s, when the entertainment ended.

The castle was bought by an American firm that wanted to turn it into a hotel.

Sadly, the deal fell through and the castle fell into disrepair. As well as being a target for heavy vandalism.

Today, the castle has experienced some renewed hope.

The Gwrych Castle Preservation Trust was formed to protect the castle for the benefit of the Welsh people.

It was at this time, the haunting of the castle became evident to both the trust and the people of northern Wales.

Countess Winifred, the heiress who lived in the castle for many years is believed to be the ghost that haunts the castle.

In life, Countess Winifred, was known as a person who loved her home and was blessed with a sense of compassion for her fellow man.

She exercised that compassion by investing large amounts of her personal wealth in hospitals, the arts and religious organisations.

It’s believed this could be why her ghost continues to wander the castle long after her death.

Although Gwrych Castle is beautiful to behold, it’s most stunning feature is the marble staircase.

It is here where the majority of encounters with the ghost of Countess Winifred is said to occur.

Since her death many decades ago, an eerie ball of light has been witnessed on the marble staircase.

As people watch the ball begins to take shape and takes on the form of a woman believed to be the Countess herself.

Others have reported hearing soft footfalls moving up and down the stairs.

As well as the creepy feeling of being watched by an unknown, unseen person.

In the early days of the preservation society, a manager had an unnerving experience on the main terrace he would never forget.

While waiting in darkness for an electrician to arrive, he could hear what sounded like  chains on the gate rattling. Almost as if someone were trying to get in.

As he peered into the inky blackness, he could hear the unmistakable sound of footsteps swiftly approaching him.

When the footsteps came to an abrupt stop directly in front of him, the man turned on his torch to see whether or not the electrician was standing before him.

Fear took over when he realized he was alone. Whomever the intruder may have been, they certainly weren’t among the living.

The silent old castle will soon come alive once again when the reality tv show cast and crew take up residence in it’s drafty halls and moss covered walls.

As they struggle to stay warm and explore this haunted castle, I hope they are respectful of Countess Winifred.

After all, it is still her home. 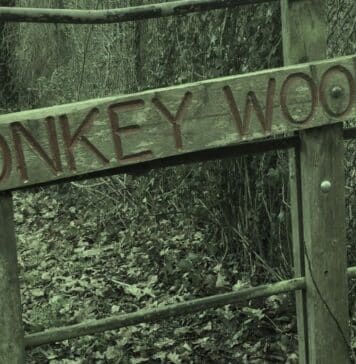 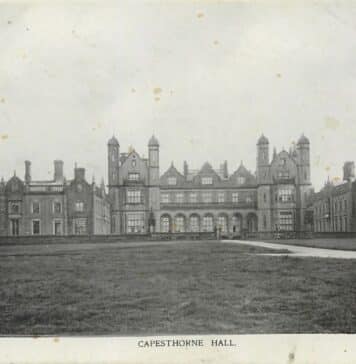