The town of New Ross is small and pretty, with hints of its medieval merchant past still visible in the old town walls and converted stores. It sits on the bank of a wide and deep tidal river. The first bridge to span the water was constructed on the order of William Marshal, Earl of Pembroke and Lord of Leinster, married to Isabel de Clare, daughter of the powerful Strongbow, Richard de Clare.

The port was once one of the busiest in Ireland, ringing with the sounds of crews loading and unloading ships. Many languages could be heard on the docks, along with the noise of the work and activity.

In the early twelfth century, a group of monks known as the Crutched Friars, or Fratres Cruciferi, named for the staffs surmounted by crucifixes that they carried, established an abbey in New Ross.

The monks were granted the right to levy tolls on river traffic and they gradually became more greedy and corrupt, imposing higher and higher taxes. By the middle of the century, the townsfolk could no longer tolerate the burden of the tolls. After many disputes, a battle finally broke out between the townsfolk and the monks, both in the town and on the river. 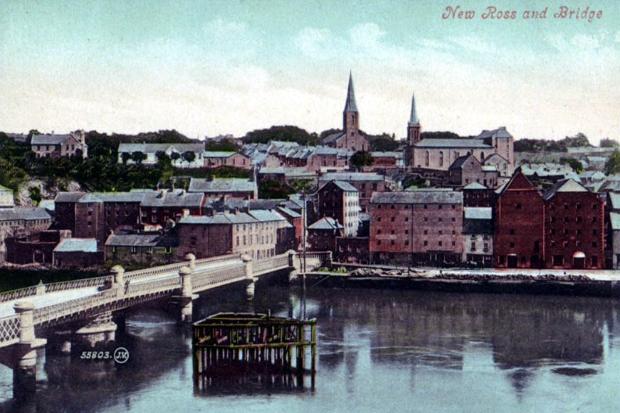 The battle resulted in the death by drowning of three of the monks and one popular townsman. The enraged citizens stormed the abbey and drove the monks from the town. As they were leaving, the abbot put a curse on the town, declaring that the river would take three lives a year by drowning to compensate for the lost monks.

The church in the twelfth century supported the monks and withdrew the sacraments from the town, preventing Christian burial and other ceremonies. Subsequent popes attempted to raise the restriction, but the missives were lost under mysterious circumstances, such as shipwrecks, before the message could reach the town.

The town relied on its port for its living. The port survived the curse and was busy with commercial ship traffic until relatively recent years. However, there have always been stories and there is still a belief that when tragedy befalls the town through a death by drowning, it is the fault of the monk’s curse. A mere two generations ago, the masts of sunken ships could still be seen at low tide. The past is never very far away and ghosts abound.

Centuries after the rout of the monks, a Crutched Friar came to New Ross in 1945 and lifted the curse.

That little known event doesn’t convince many that the curse is gone. To this day, people in New Ross know of the curse and cite it when a tragedy occurs. The river is deep and wide and holds more secrets than will ever be known. It is a pretty town with a friendly and cultured society, which includes such events as an International Piano Festival and a Choral Festival. But like any town, it has both light and dark about it. Don’t be afraid to visit, because all that is in the past, I’m sure. Or almost sure.

TINA CALLAGHAN is a writer of speculative fiction, both for children and adults. Her stories involve elements of history, mythology and the supernatural. Her short stories have appeared alongside horror and science-fiction greats Stephen King, Dean Koontz, Ray Bradbury and Robert Bloch. Dark Wood Dark Water – her debut novel – is now available from Amazon.

25 April 2016 0
Can you handle your Irish spirits? ANN MASSEY takes a look at the most haunted Dublin pubs
Read more
Load more