The horrific cries of an executed baby murderer may be heard coming from the depths Old Calton Jail in Edinburgh, says JOHN TANTALON

St Andrews House on Regents Road is a grand sight. The building exists as the premises of The Scottish Government. The impressive Art Deco and Streamline Moderne architecture perches majestically on top of Edinburgh’s old town. The building, constructed in 1939, stands on the site of the Old Calton Gaol. The former prison, which resembles an enormous turreted fortress, served as a form of exile for many detainees.

The infamous Burke and Hare were behind its towering walls until Burke’s execution in the Lawnmarket in 1829. Political prisoners, terrorists and later conscientious objectors who refused to fight in the First World War also graced this exclusive address.

Our story concerns another resident of the Old Calton Gaol who, if you believe in these things, continues to reside there today. Buried beneath the car park off St Andrews House deep in the basement of the building.

In the autumn of 1889, two boys from the Stockbridge area played in a narrow-cobbled street. Their adventure on that afternoon led them to Cheyne Street, situated off Raeburn Place. There they discovered what they thought was a football, and the rugged object, banded together with an old oilskin, became their source of entertainment.

The boys played football with their newly found ball and as the day progressed, it began to collapse. The deterioration in shape led to an investigation of what sat within the tattered object.

Horrifically, the object of their afternoon’s entertainment, gave up the decomposed remains of a new-born child, The boys looked on in shock as the hideous contents unfurled on the derelict ground.

A police investigation swiftly followed, resulting in a raid on a nearby property. Police arrested the residents, Thomas Pearson, and Jessie King, on a charge of baby farming and murder. The couple’s macabre plan to ‘relocate’ illegitimate children for a fee, resulted in the extinction of the innocents they accepted at their Cheyne Street address.

Media frenzy confirmed that the blame for the heinous crime lay with 27-year-old Jessie King. After turning Queens Evidence and claiming no responsibility for the crime, authorities acquitted the 57-year-old Pearson. King, impoverished, uneducated and today presumed to have suffered from mental health problems, was sentenced to execution within the walls of Old Calton Gaol.

King’s body remains were unceremoniously buried, with 15 other prisoners, in what is now Saint Andrews House car park…

It is mid-November, the end of a busy Friday for the mailroom staff of St Andrews House. Night draws in, autumn announces its presence. Regent Road lies bathed in darkness, Princess Street glows in the distance. Leaves cascade around the steps of Calton Hill, settling on St Andrews House…

Harry wheels the mail trolley along the corridor for the final time that day. The sound of his colleagues above preparing to pack up and close the office for the weekend encourages him to do likewise.

He pushes the trolley into a storage room and commences back along the corridor which has always remained markedly colder than the rest of the building due to its location in the desolate basement, which holds archives now rarely used.

As he approaches the stairwell, something catches Harry’s eye, an enormous ancient wooden door. Behind which lies a room long unused, one of two extant areas of the Old Calton Gaol.

This door sits ajar, light reflecting from the corridor into a bevelled glass panel. The small, rounded portal is not a conventional window but an observation spy hole. The ominous connecting room it looks onto was known historically as The Condemned Cell

Harry reaches over to close the door, pulling it towards him he hears the sound of shuffling at the rear of the dark expanse.

“Is somebody there?” he calls. “I’m closing up we’re shut for the day.” Nobody replies, minimal shuffling continues, from but a few feet away.

Harry locates a torch from his trolley. It flickers at first but banging it on the wall brings forth illumination… He pushes the door further ajar and, furnished with a loud creak, the dark expanse of the room is now present.

He raises the torch’s beam and points it within the vicinity of the chamber. The shaft cascades across the confines of the cell, an array of dust present.

He scrutinises the location, but nobody is inside. Yet still, the faint sound of shuffling continues.

Now, thoroughly bemused, he enters the cell for a better look. At which, the heavy wooden door slams behind him. Which causes a startled Harry to drop the torch, which immediately blinks into darkness.

He frantically tries to locate it as it rolls across the cobbles filling him with dread. Backing towards the door, he screams for help, a minuscule fragment of the light present through the glass door viewer.

The shuffling sound returns apparent on the opposite side of the cell. Harry turns from the door staring back into the dark abyss, terror-struck as the sound continues. And he continues to call out until he is stopped by the sound of pathetic muffled crying directly opposite the area of the shuffling sound.

“Please, Tam; ye have tae tell them what ye did,” it sobbed.

“Tam Pearson, for god’s sake, help me, I dinnae want tae to die.” It cried out in rage

The grand heavy front door of St Andrew House pulled shut with a mighty bang. The security guard turned the key in the lock and proceeded along the dark path of Regent Road.

Monday morning came, and the staff opened for the day; business as usual. The mailroom staff prepared for another busy shift and commenced by locating the trolley from the basement of the building.

The worker turned the cart around and proceeded towards the lift area; he pressed the button and waited. The man became aware of a distant tapping sound behind where he stood. He turned and realised that the noise emanated from behind the old cell door. Harry Fortune was discovered later that morning and transported straight to hospital suffering from shock. Having spent the entire weekend trapped in the confines of the remains of Old Calton Gaol, the man never returned to work at St Andrew’s House.

The gentleman who relayed this terrifying supernatural tale to me informs me that Harry’s hair had turned from brown to pure white upon his discovery that morning. From that day forward, the staff members were instructed only to work in pairs in the vicinity of the basement, strictly forbidden from visiting after dark.

Builders later removed the door of the basement cell, and the dreadful exhibit now resides in the upstairs bar of a Grassmarket pub. The ominous wooden structure now hosts an entrance to a function room available for hire to the public. If you are brave enough, you may choose to visit the location and possibly step through the door as Harry Fortune did all those years ago.

You, too, may hear the chilling sound of Jessie’s sobbing voice begging for eternal mercy from her dark and lonely grave. Her spirit is trapped for eternity in the grounds of St Andrews House situated on the site of Old Calton Gaol.

Have you seen anything strange at Old Calton Gaol? Tell us about it in the comments section below!

JOHN TANTALON is an Edinburgh author, the face and voice behind North Edinburgh Nightmares, its two books, and several videos. It covers stories of Edinburgh’s haunted history and things that go bump in the night.  Ghostly Edinburgh tour guide covers three separate parts of the city and its many frightening tales. Book number three is arriving soon, covering the haunted realms of Surrey and Hampshire,  an area the author has researched for many years. You can follow him on Twitter, Instagram and Youtube. 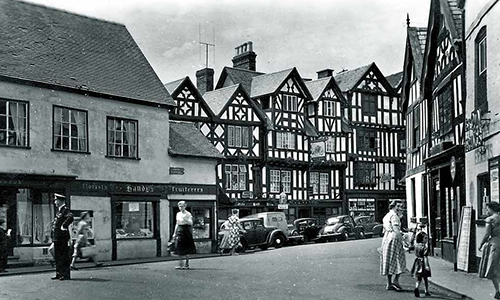