As a writer of fictitious ghost stories, I quite like the ghosts  to leave physical traces every now and then. They help to upset the living characters in the story. But one psychical researcher  who insisted that apparitions do not leave such traces was G. N. M. Tyrrell.

Tyrrell was born in 1879 and died in 1952. Educated at Haileybury School, he took degrees in maths and physics at London University and was a pioneer of radio technology, who worked with Marconi. In 1908 he joined the Society for Psychical Research, where he developed a strongly experimental approach to research in telepathy. In 1943 he gave the Society’s prestigious Myers Memorial Lecture on the subject of Apparitions. It’s these fascinating lectures that I want to summarise for you now.

Tyrell drew on a wide range of cases reported by ‘reputable’ people, which he divided into four classes. First, experimental cases involve people trying to project images of themselves, such as the wife who appeared in the cabin that her husband shared with another passenger on a steamship in the middle of the Atlantic Ocean. Both men saw her. Next there are crisis-cases, eg, the appearance of a young airman to his half-sister in India at the moment when he had been shot down and killed in France in 1917. Third, post-mortem cases are apparitions of people who have been dead for more than twelve hours. An instance is the appearance of a man’s long-dead father to both the man and his wife, reproachfully warning the son against a financial deal that would have ruined him. Fourth, there are hauntings, where a figure typically appears in a house and walks through it in a fixed way with no or very little interaction with the living occupants. Tyrrell also briefly discusses clairvoyance and out of the body experiences as further sources of evidence.

In the middle of his lectures, Tyrrell describes the ‘perfect apparition’, ie, one which displays all of the characteristics of apparitions that he could identify from his research. He asks us to imagine this apparition standing beside a living human being:

But what causes apparitions? Tyrrell says that they are essentially telepathic. An agent (eg, someone who is dying) sends an ‘idea-pattern’ to a recipient (eg, someone they love). It isn’t really clear what Tyrrell means by an ‘idea-pattern’, but you might think of it as the script for an ‘apparitional drama’. The script states the sender’s purposes and says what the apparition will look like, wear, do and say. 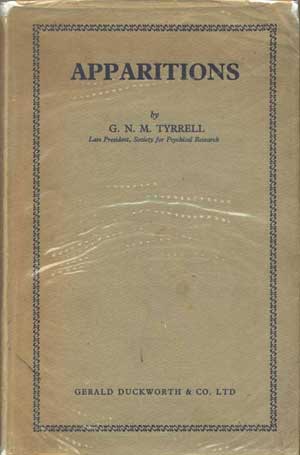 But Tyrrell’s theory is more complicated than this. He says that a ‘producer’ and a ‘stage carpenter’ produce the ‘apparitional drama’, but that these roles are actually shared between agent and recipient, ie, they are roles of ‘the mid-level personality’ at which level individuals are not clearly distinct. So the medium of transmission is mental rather than physical. At a technical level, the stage carpenter uses the mental apparatus that normally interprets physical sense-impressions in order to stage the apparitional drama. This sounds a bit like how dreams are produced to me. Where there is more than one witness of an apparition, this can be by ‘contagion’ from the recipient’s producer and carpenter to those of other bystanders.

Tyrrell seems more interested in the living than the dead, but thinks that the most natural explanation for well-evidenced hauntings is that the mid-level personality of the dead person still exists.

Does Tyrrell’s theory make sense? Three sets of people are likely to be hostile to it. One group would say that his approach is rationalist, but that the supernatural by definition is about the inexplicable and the horrible. ‘There be monsters’, which no scientist will ever be able to dissect. Anthropologists and literary critics might belong to this group. Another group might believe  that ghosts are physical. Ghosts, on this view, can leave traces on transducers. They exchange energy. People who pore over strange smears on  photographs might belong to this lot, and think that Tyrrell is rather missing the point. A third group will consist of physicists and philosophers who do not believe in mental things at all. They will say that only matter exists, and that Tyrrell and all the readers of this website are credulous idiots.

For my part, I think Tyrrell’s analysis is fine as far as it goes. To be sure, there are issues. First, what is to count as ‘reputable’ evidence? The answer to this often seems to be ‘what well-to-do people say’, but that isn’t really satisfactory, for anyone can have obscure psychological reasons simply for inventing ghost stories. And yet, I’m sure that most people reading this site will know of people whom they trust who are willing to swear that they’ve seen people who physically weren’t there. You might even have experienced this yourself, or have had numinous dreams in which the dead speak. Second, Tyrrell’s theory, perhaps understandably, does not really get to grips with the relationship between the physical and the mental.  Materialism is fashionable these days among philosophers, neuroscientists and psychologists, but I do not find it convincing. Colours, smells, feelings and our heart’s imaginings seem to be correlated with a physical realm, but aren’t obviously reducible to it. A theory that ignores either the mental or the physical isn’t ultimately acceptable, in my view.

A potential way forward is to treat the world as consisting of information. This helps us to sidestep the distinction between physical and mental things. As the philosopher Spinoza argued centuries ago, they are alternative ways of describing the same reality. A focus on information also helps us to see that psychic phenomena, including those studied by Tyrrell, usually convey very little data. They create a shock. They make a simple point. Where they are more extensive, eg, in seance transcripts, they are often vague and meaningless.

Now this gives me the germ of a theory of psychic phenomena. Perhaps such episodes are little rips in the fabric of reality, where the physical and the mental get out of alignment? As the parapsychologist John Beloff once suggested, Nature might act as a huge immune system and quickly close up these little rents? That would explain why psychic phenomena convey so little information, and why they are virtually impossible to replicate. And emotional distress is a credible cause of such tears
In art, we can have as many thrills as we like; but in science, we should be disciplined seekers of truth.

DUNCAN WOOD is a a psychologist and researcher who was educated at Peterhouse, Cambridge, and the Open University. His books, Four Ghostly Tales, More Ghostly Tales and Five Ghostly Tales are from Amazon. You can follow him on twitter @ghostlybooks and on Facebook.

28 April 2012 12
York, some claim, is the "Most Haunted City in England". MIKE COVELL looks at some of its spookiest locations...
Read more

25 December 2021 0
RICHARD MARKWORTH takes a look at A Warning To The Curious, the BBC's 1972 annual A Ghost Story for Christmas
Read more
Load more