I had always been a fan of Guillermo del Toro, both his writing and direction, however, after the let-down of ‘Mama’, I approached this film with high expectations and more than a little trepidation.

It’s 1887 and Edith Cushing is the young daughter of an American construction tycoon who is visited by the ghost of her mother, who delivers the chilling warning to beware of ‘Crimson Peak’. Fourteen years later Edith (played by Mia Wasikowska) is now an aspiring author of ghost stories who falls for the ambiguous yet seductive Sir Thomas Sharpe, a role well cast in the form of Tom Hiddleston.

Eager to escape tragic events and a broken heart, Edith marries Sir Thomas in haste and finds herself in the magnificent yet dilapidated Gothic ancestral home of Sir Thomas and his enigmatic and troubled sister, Lucille (Jessica Chastain). 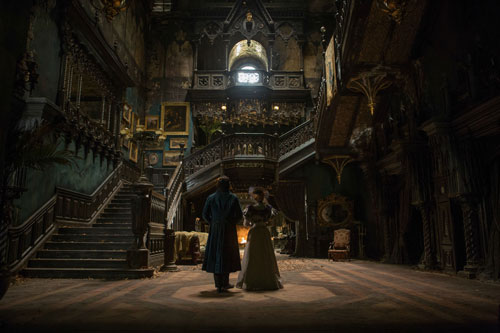 As Edith once again begins to be terrorised by ghastly apparitions conveying dire warnings, she digs into forbidden areas and starts to unravel a deadly mystery, uncovering a sinister series of events that centre on Sir Thomas and Lucille and the red clay foundations of Allerdale Hall.

The cinematography and casting were first rate and ‘Crimson Peak’ does have the elegance of ‘Pan’s Labyrinth’ and ‘The Devil’s Backbone’ together with their jarring moments of horror and brutality, so one would assume that ‘Crimson Peak’ would be equally enthralling to view. Unfortunately, I just couldn’t help but feel

I had seen it all before.  In fact at one point I felt I was watching a period drama version of ‘What Lies Beneath’ with the ending taken straight from ‘The Crow.’

That said, it was watchable and to a degree, enjoyable, just not original and I expected so much more from del Toro. It is also hard to pinpoint a genre to this mixed up miscellany of film. It has been billed as a gothic romance and also as a horror yet to me it stands firmly in the camp of psychological thriller with an incidental nod to horror and fantasy.  The plotline would have unfolded regardless of the ghostly interventions and to me that means something was definitely missing.

‘Crimson Peak’ had the potential to be a masterpiece, however ‘borrowed’ ideas, a lack of identity and a far too twee ending just ruined it for me. Stephen King may have thought it was terrifying, however, I felt it overpromised and under delivered.

Neglected Monsters, or Why Frankenstein was a Terrible Father