TERRY SHERWOOD takes a look back at animated horror classic Mad Monster Party? 1967, starring Boris Karloff in his last brush with his most famous role

Boris Karloff had entered a career period where he was a name to be put on the marquee to bring in an audience. It was the later stages of the Monster boom in North America.

While on screen roles were difficult due to Karloff’s health, you would never know this when viewing his physical presence in some of the actor’s later film catalogue. The lucrative voice actor market was open and as we all know, Boris Karloff was blessed with a distinctive voice.

He had recently recorded the LP narration of the Forrest Ackerman penned reminiscences of monsterdom called An Evening with Boris Karloff and Friends. Boris had completed the now famous and still superior animated How the Grinch Stole Christmas! 1966.

Dr Seuss’s story would have its way with him; before that was one last calling of the Frankenstein saga, supplying the voice for Baron Boris Von Frankenstein in the Rank/Bass production of Mad Monster Party? 1967.

The Dead Travel One Frame at a Time

The picture was photographed using Rankin/Bass’s “Animagic” stop motion animation. This slow procedure of moving figures minutely and photographing each frame was similar to one used in RKO’s King Kong 1933. This was, of course, long before computer animation and the now outdated rotoscope. Tadahito Mochinaga at MOM Productions in Tokyo performed the photography process.

Mad Monster Party? 1967 was written by Mad Magazine co-creator Harvey Kurtzman (with writer Len Korobkin) and Mad Artist Jack Davis, who designed many of the characters. The script was filled with light humour, in jokes and puns similar to style found in the pages of the early Bill Warren/Forrest Ackerman Famous Monsters of Filmland and magazine.

So much humour and silliness was in the finished film that it was rumoured that Ackerman had worked on the script, but that was later denied. Jack Davis’s art work of a poster of the Frankenstein monster was sold in the back pages of Famous Monsters magazine.

The Scream Heard Around The World

Mad Monster Party? 1967 features several celebrity likenesses. Boris Karloff and Phyllis Diller, who played the monster’s mate, had characters designed to look like the actors. Baron Frankenstein’s lackey, Yetch, is a physical and vocal caricature of Peter Lorre. He has some of the best love smitten lines in the picture, voiced by actor Alan Swift.

Swift also performs impersonations of James Stewart when voicing Felix Flanken the naïve pharmacist, Sydney Greenstreet as the Invisible Man and Charles Laughton as the freighter Captain. The film is peppered with choreographed musical numbers with original songs and one of the best dance band sound tracks for incidental music that I have heard.

The Book of Life and Death

The story surprisingly doesn’t follow any of the Universal canon. On the Isle of Evil, Baron Boris von Frankenstein finds his ultimate ambition in creating a formula of total destruction. He sends out messenger bats to summon all monsters to the Island, where he intends to inform them of his discovery and retirement as head of the “Worldwide Organization of Monsters”.

The monsters include Frankenstein’s Monster (sometimes referred to as “Fang” as part of the Phyllis Diller comedy act that was huge at that time).You have Count Dracula looking like Bela Lugosi and is the prototype for the “Count” on Sesame Street. Dracula calls himself ‘The original Batman’ at one point referencing the Adam West/ Burt Ward Batman television series that was popular at the time.

The Mummy bumbles around in his or her sarcophagus that is carried to the island by an inarticulate Quasimodo (referred to as “The Hunchback of Notre Dame“). The Werewolf, not referred to as The Wolf Man, The Invisible Man, Dr. Jekyll and Mr. Hyde, and the Creature from the Black Lagoon (referred to as just “The Creature”) are here too. Absent is the Phantom of the Opera.

The Baron’s beautiful assistant Francesca (who looks like years in the future Joan Holloway), portrayed by Christina Hendricks (voiced by Gale Garnett) enters the lab to confirm that all invitations have been delivered. The Baron reveals he is going to offer human Felix Flanken his nephew and the position of head of the Monster business. Francesca, who wanted the position herself, asks why there was not an invitation for “It.”

The Baron replies that “It” was not invited since “It” can be a crushing bore, explaining that “It” even crushed the island’s wild boars in his bare hands the last time. You find out what “It” is as the mayhem and music numbers give way to the monsters trying to kill Felix before “It” unexpectedly arrives to hit airplanes in an explosive climax.

Mad Monster Party? 1967 features a vague allusion to Universal studio monster films; particularly when the Frankenstein Monster sheds tears in a moment of crisis. His mate, voiced by Phillis Diller, remarks that he is crying much the same as Karloff did during the hermit moment in Bride of Frankenstein 1935. The Invisible man is drawn the best with the Greenstreet costume and vest that the actor wore in Casablanca 1942. Swift, sharp dialogue and comedy moments abound, such as Dracula swinging from a tree like a pendulum trying to get Felix as he is being romanced by Francesca.

Mad Monster Party? 1967 features Broadway style songs sung in character that makes for mayhem of a family-friendly kind. The postscript is that it was Boris Karloff’s last involvement in a production connected to the Frankenstein saga. At one time, I owned the comic adaption of the film that has a different ending to the story. Rollicking, just-park-your-brain-in-a-jar fun. The film is available in remastered versions with the soundtrack. Sadly, this is not alongside the wonderful incidental big band music.

Have you seen Mad Monster Party? Tell us about it in the comments section below! 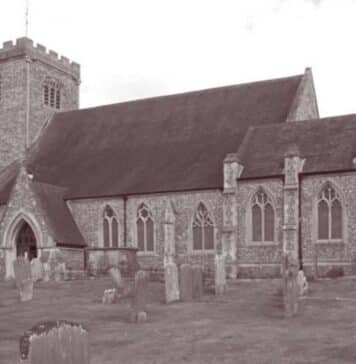 15 September 2012 1
NICOLA CARPENTER describes the gruesome discovery of a mummified baby during renovations of a church in Thatcham, Berkshire
Read more