A mysterious character with, in the most lurid accounts, impossible leaping skills, iron-tipped claws and fire-breathing abilities, Spring Heeled Jack was responsible for a series of widely reported attacks and late night scares in London between 1837 and 1845.  Despite the death of the chief suspect, the controversial and raucous Marquess of Waterford in 1859, sightings continued, spreading all over the country.
The Manchester Courier and Lancashire General Advertiser of Saturday 22nd October 1887 ran a detailed, sensationalist story on the “nocturnal peregrinations” of a ‘ghost’ in the Oxton area.  “Reports are in circulation that several people, mostly females, have been so frightened… of the spectral figure that they are at present suffering complete prostration” and one woman “is said to be suffering terribly – if she has not actually died – from fright…”    The ‘ghost’ is described as looking like a “tall gaunt female, or a military officer with a long cloak” and the newspaper speculates that the mysterious person is playing the part to win a “heavy wager” and needs to keep up the act for six months.  It’s ability to leap “the highest walls with little or no effort” earned it the ‘Springheel Jack’ name and “the doings of the strange individual are now the talk of the district… the public feeling is so high that should the ghost be captured he will no doubt be severely handled.  There is a report that a constable had succeeded in laying his hands on the spectre but, the latter being powerful and in possession of a pistol, the policeman had to relinquish his hold.
A few months later, the Hartlepool Mail of Saturday 4th February 1888 carried a short note that “since Christmas, the inhabitants of some of the Western suburbs of London have been greatly alarmed by the antics of a young man to whom the nickname ‘Springheel Jack’ was given.  He would suddenly appear in the guise of a gorilla or huge dog, and sometimes attired in a white sheet and with a spectre-like skull.  It is stated that he was yesterday traced to a house in Shepherd’s Bush, and when a threat was made to give him into the custody of the police he promised to abandon his foolish prank, and not again to frighten weak-minded people as he had been doing.”
Three years later, the Sheffield Evening Telegraph of Friday 28th August 1891 reported on “exciting scenes in Cheshire” where, in the village of Ledsham, “a man, evidently a lunatic, haunts the lanes and roads as soon as it is dark, accosting women and children.”  The same man apparently paid a visit to Willaston two miles away where he tried to kidnap a girl.  She “screamed and ran away in the direction of her home, closely followed by this man”.  Her screams attracted the attention of some local men who gave chase “across the fields, but he was not captured… jumping and clearing the hedges with the greatest ease.”  The report names the man as earning the nickname ‘Springheel Jack’ and ends by noting that “several bands are now forming amongst the youth of the neighbourhood with the object of affecting his capture.”
The Worcester Chronicle of Saturday 26th April 1902 reported that “the inhabitants of Baker Street at Gorleston have for some time past been the victims of a practical joke, which has at length been brought to light.  Every evening after about 9.30, different people, more especially young ladies returning home, have been pounced upon by a person, believed to be a man, wearing a large overcoat.  The persons, beyond being very much frightened, were otherwise unmolested.  The police were apprised of this mysterious Springheel Jack, and they have been able to trace the individual as a young lady belonging to Gorleston, who, dressed in her brother’s attire, was desirous of indulging in what she considered a practical joke upon her neighbours.  The ‘joke’ has now been discontinued.”
Finally, an article on the history of April’s Fools Day pranks in the Evening Telegraph of April 1st 1903 noted that “a few years ago the whole city of Birmingham was greatly befooled.  For some time the suburbs had been haunted by a mysterious nightly prowler, whose magic disappearance by means of marvellous leaps over walls and gates won for him the name of ‘Spring-heel Jack’.”  A local newspaper printed a letter in which ‘Jack’ promised to demonstrate “his existence and vaulting powers” by jumping, at noon the next day from the roof of the Market Hall, clear across the Bull Ring and onto the roof of St. Martin’s Church.  “Absurd as it sounds,” the article claimed “a vast crowd of hard-headed Brummagen people assembled to witness the feat, and rioting nearly followed when Spring-Heel Jack did not appear.” 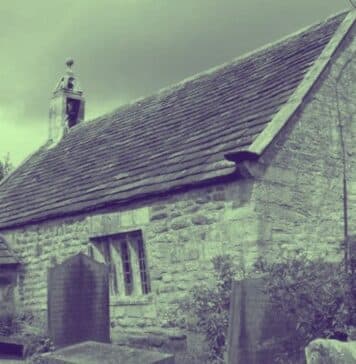