PETER FULLER, tells us some interesting facts about Cry of the Banshee 1970.
In 16th-century England, magistrate Lord Edward Whitman (Vincent Price) leads a crusade to rid the countryside of witches and heretics practicing the old religion. Whitman stops short of killing Oona (Elisabeth Bergner), the high priestess of a druid cult, but his decision turns out to be a big mistake: Oona swears revenge against Whitman and his family and calls on Satan to ‘send her an avenger’. The avenger turns out to be a sidhe, an evil spirit that, when called on, transforms Whitman’s step-groom Roderick (Patrick Mower) into a demonic beast, who then stalks and slays the Whitman’s one by one…

1970’s Cry of the Banshee was a blatant attempt by American International Pictures (AIP) to capitalise on the success of their notorious 1968 film Witchfinder General, which spawned a series of witch hunter rip-off in the early-1970s, and was the final entry in their Edgar Allan Poe series of period horrors.

2) But it’s not an Edgar Allan Poe story.

During the 1960s, AIP produced eight Gothic horrors adapted from the works of Poe and with Roger Corman directing. Price starred in 7 of them. Following 1965’s Tomb of Ligeia and Corman’s departure to do more youth-orientated flicks, AIP continued to churn out more Price-led adventures with Poe’s name loosely attached. Apart from some a spurious salute to the author’s poem, The Bells, in Cry of the Banshee’s pre-credit sequence, there’s no reference to Poe.

Not at all. In another example of AIP’s exploitation marketing techniques, a cake was baked and party was held during the film’s shooting to mark this so-called milestone in Price’s film career. In reality, this was Price’s 76th feature film – and that’s even including his many cameos he appeared in since his film debut in 1938’s Service de Luxe. AIP also had a memory lapse when it came to promoting Price’s next feature, The Abominable Dr Phibes, as they announced the same thing at the film’s gala premiere at LA’s Grauman’s Chinese Theatre.

4) What were the other so-called Poe films?

Wargods of the Deep (1965), which had Price quote some lines from City Under the Sea (which is also the film’s UK title); Witchfinder General, where the title was changed to The Conqueror Worm for the US market; Spirits of the Dead (1968), which featured three Poe stories and had Price quote a line from a Poe poem; and The Oblong Box (1969), which just used the title of Poe’s 1844 mystery tale. After Cry of the Banshee, AIP started mining the works of other authors like Leopold von Sacher Masoch and the Marquis de Sade for their Gothic chillers (but added more sex into the mix). 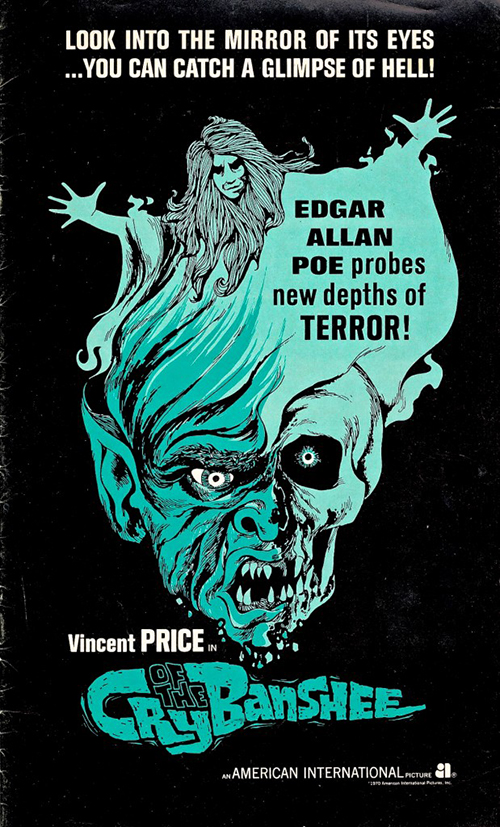 5) This wasn’t the first time that director Gordon Hessler had worked on a Price film.

The former Alfred Hitchcock Presents producer/director first worked with Price on AIP’s The Oblong Box in 1969, where he was brought in to replace Michael Reeves, who died shortly after making Witchfinder General, which was his big break in films. Happy with Hessler’s performance on the Victorian Gothic horror, AIP contracted Hessler for four of their features, including Scream and Scream Again, which also featured Price. Hessler, who died in 2014, would go on to helm 1973’s The Golden Voyage of Sinbad before turning his hand to US TV shows like CHips and the TV movie KISS Meets the Phantom of the Park.

6) Hessler threw out the original script.

American screenwriter Tim Kelly (Sugar Hill) wrote the original story, which saw the character of Roderick (played by Patrick Mower in the film) torn between carrying out Oona’s curse and fleeing with Maureen. Hessler regarded the script as the worst he’d ever worked on. ‘Everybody realised it was disastrous,’ recalls Hessler. ‘All we could do with that film was try to make it cinematically interesting: strange angles, moving camera, that sort of thing.’ Christopher Wicking, who had penned Oblong Box and Scream and Scream Again, was drafted in to complete the rewrite, but due to budget restrictions, couldn’t use any of Hessler’s more extensive witchcraft research.

7) The cinematography of Cry of the Banshee is very atmospheric.

That’s down to John Coquillon, who employed the same lush painterly colours that he used in Witchfinder General to give the film’s countryside scenes a realistic period ambience. His inventive use of hand held shots in the film’s interior scenes also kept the film moving along, and gave a real sense of claustrophobic dread.

8) The location is well famous.

To give the film a sense of scope, Hessler chose to make the film entirely at a real-life location – the Gothic revivalist Grim’s Dyke House in north London, once the home of Sir William S Gilbert of Gilbert & Sullivan fame. The estate had previously been used in Curse of the Crimson Altar with Boris Karloff, The Blood Beast Terror with Peter Cushing and The Devil Rides Out with Christopher Lee, making it the spooky spiritual home of the Kings of Horror.

9) There’s more than one version of the film.

There are two radically different versions of the film floating about – the original UK cut (essentially Hessler’s director’s cut), which ran at 91-minutes, and the US theatrical release, which was cut to 87-minutes (to remove all the nudity and violence) and given a PG rating. It was this heavily-edited US print that was used for the UK cinema release in 1970 and later on TV (with even more cuts) and on VHS (1988). Hessler’s version got a VHS release in 1995, then on DVD in 2003 and 2008. To date, the two edits have not been released together.

Using his trademark paper cut-out technique, Gilliam had Vincent Price’s head crack open to let loose colourful winged creatures that look a bit like John Tennial’s 1871 Jabberwocky illustrations in Lewis Carroll’s Alice in Wonderland books. This sequence was replaced in the US version with stills of the creatures.

The original music score was composed by Wilfred Josephs (I Claudius, The Deadly Bees) and conducted by Philip Martell, but was replaced on the US release by AIP’s in-house composer and the undisputed king of lounge and exotica, Les Baxter. While Josephs’ score was restored in the later uncut DVD releases, Baxter’s ended up quite the collector’s item when it was later released on vinyl.

Most telling is the scene in which Price’s Whitman presides over a party while making sport of two villagers. It echoes his Prince Prospero in 1964’s The Masque of the Red Death. And when the merriment is cut short by another ghostly wail, it is almost a replay of the scene in which Prospero’s guests gasp at the sudden tolling of a large clock. Another noticeable rip is getting Hilary Dwyer, who plays Whitman’s daughter Maureen, to scream and scream again as she did in Witchfinder General’s chilling closing shot. 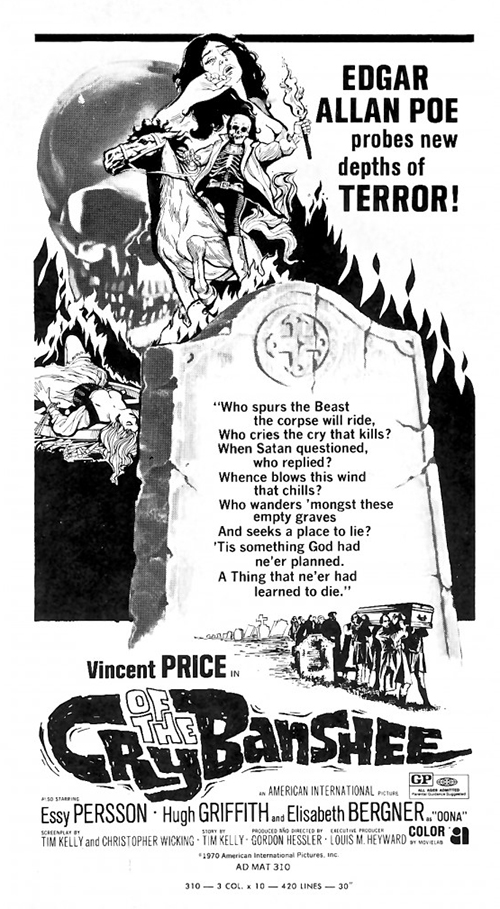 13) There are no banshees in the film.

The film’s ‘monster’ is not the banshee of the title, but a ‘sidhe’. In folklore, these are fairies and not the werewolf creature that the filmmakers dreamt up (using a lame plastic Halloween mask). In Celtic folklore, a banshee is a woman of the fairies whose mournful night wailing can foretell the death of a member of any household she visits. As such, it’s actually the witch Oona (played by Elisabeth Bergner) who is the banshee, rather than Roderick transformed.

14) Oona is played by a once-famous silent screen star.

The film proved a mighty sad screen return for Elisabeth Bergner (1897-1986). The German stage and screen actress made London her home after fleeing the Nazis in the 1930s and is best known for appearing opposite Laurence Olivier in 1936’s As You Like It. As Oona with the flowing red hair, however, she does little more than stick pins in voodoo dolls while flouncing about in a trailing, diaphanous shift (she also got her name misspelled in the credits). And it’s a shame she doesn’t get to use her wonderfully exotic graveled voice more than other utter ‘My children’ over and over.

Having worked mainly on stage in repertory and at the Bristol Old Vic, Lancashire-born Dwyer (b 1945) did stints on The Avengers and The Prisoner before making her big screen debut as Sara Lowes in Witchfinder General, who gets lusted after by Price’s ruthless Matthew Hopkins. Impressed by her performance – but more probably at her ability to scream – AIP gave her the role of Price’s wife in The Oblong Box, then that of his daughter in Cry of the Banshee. Of their pairing, Price said, ‘You’ve played my mistress, my wife and my daughter. If you ever end up playing my mother, I’ll marry you’. Dwyer gave up acting at the age of 27 to set up her own talent agency with her husband, Duncan Heath, and become a TV and film producer.