Back in 1988 when I was 11 years old, I read Stephen King’s Carrie. Within months I owned almost every paperback the great (and prolific) man had written up to that point. I was also still regularly reading Tintin and Asterix comic strips and the odd Spider-Man comic. Essentially, I more or less completely skipped anything publishers now term the ‘Young Adult’ (YA) market.
If judging the genre purely by Frances Hardinge’s James Herbert Award nominated YA horror novel, I’ve spent more than a quarter of a century missing out.
Cuckoo Song, her sixth novel, is nowhere near as graphic in its depictions of horror as some of the other award nominees but its portrayal of a strangely off-kilter early 1920s English town and the unusual inhabitants hiding both in the shadows and plain sight is a fantastic read.
Triss is a young girl from a rich family (the father is a locally famous architect, the somewhat paper-thin character of her mother an upright pillar of polite society), recovering from some ill-defined accident. Despised by her younger, ferociously misbehaving sister Pen, Triss is clearly the favourite child, although her parents express their affection by forcing her into a sad, solitary and above all, sickly life.
At least two dark shadows loom over the family, the girls’ older brother Sebastian, killed a few years earlier in the Great War, and his embittered former fiancee Violet. But they aren’t the only ones and as the family’s secrets are laid bare, both girls find themselves in serious danger. 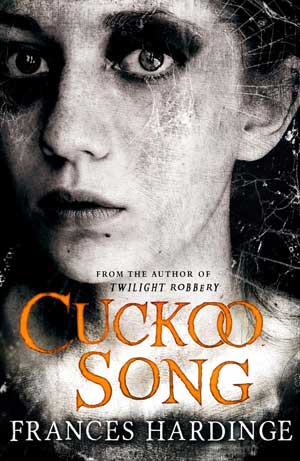 Darkly believable in its ’20s setting, replete with modern marvels like Jazz, the cinema, telephones and automobiles, even when the story takes hallucinatory, fairy tale turns it never loses it’s credibility. And the story of the girls’ central relationship is told beautifully.
The recognisably English but magical world Triss and Pen inhabit is, at times, vividly described. Many of the darker, most menacing events and images (there’s a particularly good one about a baby that could have crawled straight out of the imagination of the Brothers Grimm) are either hinted at or passed over quickly.
A more adult-themed and targeted book might dwell more on the darkness and the horror, and this book may simply be too tame for some. There’s very little that’s outright scary but as a dark fairy tale, Cuckoo Song is hugely imaginative and highly recommended.
Score (on the Goodreads scale) 4/5