ANDREW GARVEY takes a look at An English Ghost Story by Kim Newman, as part of his series on the James Herbert Award finalists

In memory of one of the most outstanding authors in the history of British horror fiction, in April 2014, publishers Pan Macmillan and the Herbert estate announced the creation of the James Herbert Award, an annual prize of £2000 for the best horror novel published in the UK and Ireland.
Intended to “find the best of the new generation of horror writers being published today” the prize will be awarded at the end of March 2015 to one of the six shortlisted novels, all published between January 1st and December 31st 2014.  Over the next few weeks, I’ll be reading and reviewing all six of them as the Spooky Isles takes a look at the best in contemporary horror novels. 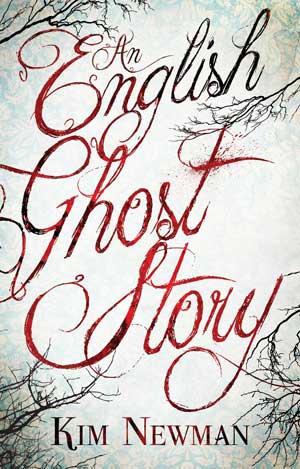 Author and film critic Newman – perhaps best known for his wacky moustache, and his willingness to watch an endless stream of straight-to-DVD genre twaddle – is an accomplished writer of horror fiction.  In fact he’s so accomplished, and so well-established, that he doesn’t fit the nominees’ ‘new generation’ profile at all.
His latest novel, about a family haunted by malevolent spirits is a departure from his Anno Dracula series (the first book published way back in 1992), a wild mash-up of historical fiction and alternate realities featuring iconic terrors like Dracula himself and Jack the Ripper.
Fittingly for a Herbert Award nominee, An English Ghost Story, is reminiscent of Herbert’s own 1986 classic, the Magic Cottage.  Leaving behind the stresses of life in late-1990s London (it’s unclear exactly why Newman set the story at that time) and hoping their new cottage in the country will magically repair their angry, fractured family, the Naremores (a play on Edgar Allan Poe’s ‘Nevermore’?) initially find that everything is wonderful.
Their new home, where a once-famous-now-forgotten author of spooky children’s books lived all her life, is full of strange and inexplicable surprises from the outset.  Mother Kirsty is enchanted straight away, the more practical but bull (and bone) headed father Steven is less so but even he notices and appreciates the effect the place has on his family.  Son Tim spends countless hours playing soldiers in the woods nearby and even Jordan, the angrily misunderstood teenage daughter seems genuinely happy.
But of course, it doesn’t stay that way.  And before long, as their anger, their fears, their insecurities resurface, the resident ghosts begin to turn against them and the Naremore family risk finding out exactly what it’s like to die in the summertime.
While superficially a story about a haunted cottage, An English Ghost Story is really about a family trying to find happiness.  Unfortunately, for most of the story, the Naremores are too annoying to really care about or be interested in, especially when things develop at such a slow pace.  So it’s lucky that Newman has crafted a story so full of strange, sinister images.
Even before things unravel, there’s a growing, creeping unease, expertly achieved.  But ultimately, the book doesn’t quite live up to its early promise.  Never quite horrifying enough, this is a horror story that dances around the edges of the genre instead of diving straight in and as a result, never quite convinces or satisfies.
Score (on the Goodreads scale) 3/5.

Buy An English Ghost Story by Kim Newman from Amazon

Richard Phillips-Jones - 10 January 2021 0
RICHARD PHILLIPS-JONES looks at the Thriller episode The Next Scream You Hear.