Oatlands Park Hotel in Weybridge is one of Surrey’s most haunted hotels. We take a look at its long history of paranormal phenomena, including the time members of the Welsh rugby team saw a ghost!

The Oatlands Park Hotel, Weybridge, Surrey, was constructed on the grounds of a Royal Tudor Palace. Though it was once home to the monarchs of England, the palace was destroyed shortly after the execution of King Charles I. Most of the royal heritage has been erased from the land, but the ghosts of its previous residents stayed behind, and continue to haunt the grounds today.

Although the main royal residence was demolished, a small hunting lodge remained. The grounds were eventually sold to Robert Turbridge of St. Martin-in-the-Fields for a grand total of £4,023, and ever since, the hunting lodge and it’s grounds were reworked into the Oatlands Park Hotel that stands today. Despite its renowned beauty though, the Oatlands Park Hotel is reputed to be haunted, with Welsh rugby players claiming to have witnessed a ghostly resident.

History of the Oatlands Park Hotel

King Henry VIII had originally planned to construct the Oatlands Palace as a gift for his future Queen, Anne of Cleves. The architectural stature of Oatlands was enough to rival that of Hampton Court Palace, and after the annulment of the marriage in 1540, Henry used the chapel at Oatlands Palace to marry his next wife, Catherine Howard.

Although the palace was inherited by the descendants of Henry, it was a particular favourite of Queen Elizabeth I, who frequently used it as a hunting lodge.

King James I and his wife, Anne of Denmark fell in love with the palace at Oatlands, and had decided to invest a large sum of money on its reconstruction. The king also imported various species of flowers from around the world to adorn the estate’s gardens.

The palace then became the birthplace of Henry, 1st Duke of Gloucester, the son of Charles I, and it’s widely believed that the ancient cedar tree beside the main drive of the hotel, was planted in honour of the Kings’ son, and had been imported all the way from Lebanon for the special occasion.

Although the tree remained, the palace was destroyed under the short reign of Oliver Cromwell, but the building that stands today blossomed from the ruins.

The Duchess of York retired to Oatlands, and visitors can still see the Duchess of Yorks’ dog cemetery that she had on the premises. The Duchess was known to be a kind and generous woman, and a monument to her memory was constructed at the bottom of Monument Hill in Weybridge.

During the 2015 Rugby World Cup, the Welsh rugby team stayed at the hotel, occupying 50 of the 144 rooms. Some players claim to have witnessed the ghost of King Henry VIII while staying at the hotel.

The story gained national coverage, when prop Samson Lee said in a media briefing: “A few boys think they’ve seen a ghost but I’m not sure they actually have

“I think it’s best to stay away from room 1313. Some of them reckon they have seen Henry VIII.

“It has been discussed over food and stuff like that, and Dan Lydiate isn’t happy about it. He actually thinks he’s seen a ghost, but I think he’s dreaming.”

Back-rower James King also said: “Dan Lydiate and Taulupe Faletau have said they’ve seen a couple of ghosts, but I haven’t seen any.

Despite some of the Welsh rugby team claiming to have witnessed the ghost of King Henry VIII, there’s also many other guests that have also claimed to have had paranormal experiences during their stay at the hotel.

The ghost of a grey lady is also frequently seen in the hotel, but hotel staff claim the apparition is friendly.

Guests have complained about sudden drops in temperature, as well as an apparition in room 1313. The room is located near the Bell Tower, where according to local legend, a maid threw herself from the tower after a quarrel with her lover. She supposedly landed near room 1313 on the third floor of the Tudor Wing, and has continued to roam the vicinity ever since.

Stories of the paranormal haven’t put visitors off, with Oatlands now operating as a popular 4-star hotel, hosting weddings, and serving dinners from the renowned Mulberry Restaurant, as well as having a range of luxurious rooms for guests to choose from.

The walls of the hotel are adorned with old artworks, and the rooms are decorated with an antique taste.  It’s certainly a hotel worthy of hosting a World Cup challenging rugby team.

Have you ever seen a ghost at Oatlands Park Hotel? Tell us in the comments section below! 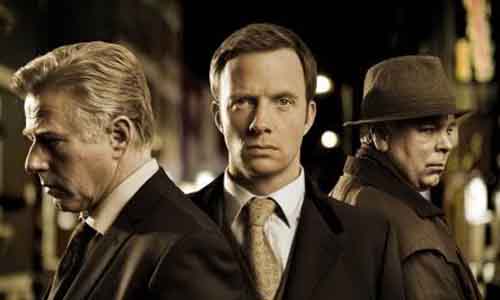