Right, let’s get this out of the way straight away: every review of this film starts with a paragraph about how much it did or didn’t cost to make.

This was an era when The Blair Witch Project had become a box-office sensation by harnessing the burgeoning marketing power of the internet and claiming to have been made for a comparative pittance, so it is understandable that much of Colin’s marketing centred on its miser-like outlay.

So yes, I’ve done what every other reviewer of this film has done, wasted 150 words on how much it cost. It is interesting to film school scholars & internet warriors, but to a more mainstream audience (granted, Colin will NEVER have a mainstream audience)? Titanic cost millions; it’s hideous. Pirates of the Caribbean: At World’s End is apparently the most expensive film ever made; it’s hideous. 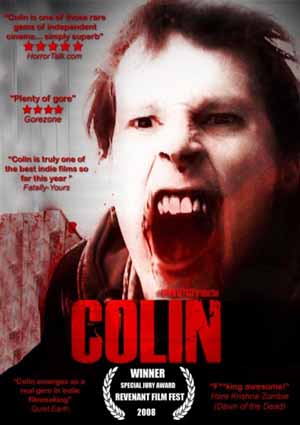 My scientific conclusion – money ain’t everything.

But, what of Colin? It’s a zombie movie with a twist – genuinely, quite an interesting twist. With an almost intimate scene involving our titular hero being turned into a meandering member of the great un-dead, the film relies on its proximity to the action rather than its poetic dialogue to convey emotion and tension. One of Colin’s major triumphs is the scenes in which we are taken right into the heart of the action; close-up and (inevitably) hand-held shaky-cam. Some sequences, such as the human versus former-human battle royal are legitimately exciting and, dare I say it, different to what you have seen before. And for a trying to talk a zombie out of being a zombie scene – Colin contains one of the most heart-rendering should I kill you, should I love you moments since Sophie’s Choice.

But…
It’s just not that good.

It is that simple; it’s British, it’s cheap and it has fleeting moments of fantastic brilliance that stand out amongst a plethora of shuffling Hollywood Un-dead, but still, the film plods along at times as if the £45 was spent on 3 great scenes with the rest of the film simply being there to push the running time beyond that of a short. Clearly, director Marc Price is a lover of the horror genre and someone who deserves much more than my amateur swipes at what is, beyond doubt, a labour of love. He has a skilled hand and a lightness of touch with a camera that works beautifully alongside some sparse yet well thought-out dialogue.

This is a shame in so many ways – we could be talking about a British film that revolutionised the zombie genre and yet I feel instead like I’m giving a bad review to the Last of the Summer Wine.

Something British, something to be loved and cherished, something with a playful knowing look at an over-populate genre and yet, and yet…there is probably something better on. However, if this film really did cost £45 to make, then go out and buy the DVD as an investment, because if Marc Price gets £90 to spend on his next film, we really could be talking about a classic.

19 October 2020 0
Canterbury is an ancient city that retains its medieval feel. Here are some haunted places you can visit in the pilgrim city.
Read more