The Brides of Dracula had held many incidents that were dropped from the original screenplay, Dracula II, written by Peter Bryan, Edward Percy and Jimmy Sangster.
John Elder, a pseudonym for producer Anthony Hinds, worked the excess into this pleasing Draculoid thriller.
A honeymoon couple is enticed by the evil Doctor Ravna (Noel Willman) and his satanic followers.
It falls to Clifford Evans’ grieving hero Professor Zimmer to rescue them both by setting loose thousands of bats to invade the castle.
To give weight to this flimsiest of storylines, Hammer hired Australian director Don Sharp.
Sharp had no inkling of the horror genre and literally took a crash course in Dracula and vampires by viewing Hammer’s earlier efforts over the course of a weekend.
He came to the conclusion that a vampire film is best viewed when the audiences are not familiar with the cast.
Stylish and evocative set-pieces such as the bal masque stand out as the heroine, Jennifer Daniel, is tricked into becoming a tasty snack for the lecherous Ravna.
Doctor Ravna is possibly the most interesting of Hammer’s vampires of the period. Living in a barren countryside – somewhere in Bavaria – and using a telescope to check out the new arrivals. He is head of a vampire coven who picks out the young lady’s of the village and has them confess their love for him in front of their wide-eyed husbands.
He has in tow his son and daughter to win the confidence of his conquests before subjecting them to fierce partying and cruel mind games. Noel Willman is an excellent – though short – substitute for Christopher Lee. One of his conquests, Tanya, is the daughter of the owners of the local inn where no one ever stops anymore. The coven of vampires have literally bled the town dry. 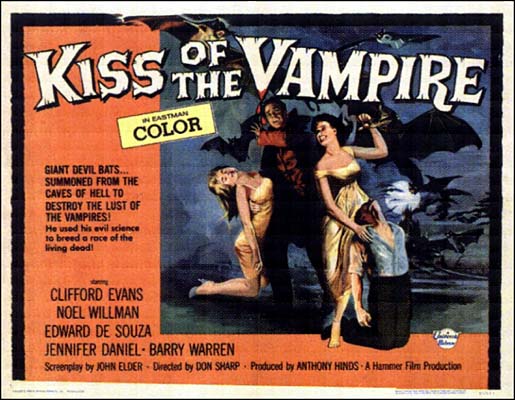 Zimmer himself is bitten by a vampire who tries to resurrect his dead daughter and cauterizes the wound with whisky and a burning hot brazier.
He had staked his own daughter with a shovel in the pre-credit sequence that ranks as one of the best openings of any vampire movie.
Other highlights to watch out for are the inclusion of an incredibly zestful vampire in Isobel Black who obviously enjoys her time as one of the undead. She would turn up very underused as a victim in Hammer’s later movie Twins of Evil (1971).
Rarely seen these days and very difficult to track down, Kiss of the Vampire is one of Hammer’s better excursions into vampire territory.
It was held back for release until 1964 because the ending was reminiscent of Alfred Hitchcock’s movie The Birds (1963). Don Sharp would go on to direct Rasputin, the Mad Monk (1965) with Christopher Lee. His treatment of this film would underline a marked lack of imagination in the company’s official Dracula sequels.
Noel Willman and Jennifer Daniel would appear together again in Hammer’s The Reptile (1967).

CHARLES E. BUTLER is the author of The Romance of Dracula and the newly-released Vampires  Everywhere: The Rise of the Movie UnDead. Read our Spooky Isles interview with Charles Butler here.

Andrew Garvey - 18 May 2013 2
ANDREW GARVEY reviews The Silent Scream, the seventh episode in Hammer House of Horror TV Series - the one with Peter Cushing!