TITLE: The Devil’s Business
RELEASED: 17th August, 2012
DIRECTOR: Sean Hogan
CAST: Billy Clarke, Jack Gordon, Jonathon Hansler and Harry Miller
PLOT: Piner and Cully are two hitmen are assigned to murder Kist, an old associate of their boss. But they discover they have bitten off more than they can chew when it turns out their target appears to have dark supernatural powers.

The Devil’s Business begins as a typical crime film with two hitmen breaking into a darkened house to wait for their victim. The film soon turns out to be more than that with supernatural forces clearly at work.

Most of The Devil’s Business takes place in the shadows with our hitmen, Piner (Billy Clarke) and Cully (Jack Gordon) waiting for their target, Kist (Jonathon Hansler). While they wait, the new-to-the-business Cully conintually talks and fidgets, clearly annoying the veteran assassin Piner. Tensions rise when our duo discover an black mass-type altar set up including the remains of a dead child and that there is clearly more to this job they first suspected. 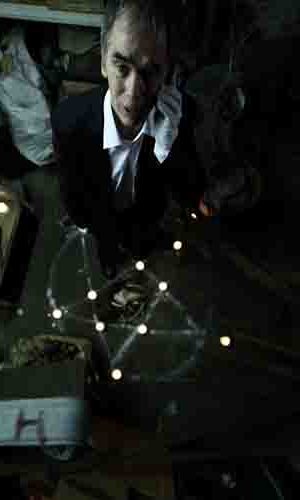 Director Sean Hogan’s second film is a tense, dark and at time brutal film, unconventional with only four actors (okay five, but you have to watch to understand what I mean) standing around in the dark for most of the time with little or no action.

The dialogue is crisp and engaging with a particularly wonderful performance from Belfast-born actor Billy Clarke as the veteran shooter.

The occult nature of The Devil’s Business reminds me a lot of early 1970s satanic films, but the thumping sympathizer-lead music could have come straight from the 1980s. At first the music was off-putting but I soon felt it swayed emotions and was perfect for increasing the sense of panic felt by our out-of-their-depth assassins.

At times, The Devil’s Business is genuinely frightening. Happening mostly in the dark with an idiot sidekick Cully, who is virtually capable of messing anything up, one feels for the businessman-like Piner, who just wants to get the job done and get out of there.

But there is much more going on than any of us realise and that’s where the fun starts for the audience.

This is a very British gangster film, ie. it’s full of the C word. So when the weird supernatural stuff starts happening about half way through the 75-minute thriller you would imagine that it would be jarring . But for some reason, it is great fun waiting to see what the hell is going to happen next.

The Devil’s Business includes a traditional ghost story, a bit of gore, some well-hard gangsters and amazingly ridiculous plot twists. I thoroughly recommend it to anyone who loves occult films of the 1970s.

How to protect yourself from Demons: Interview with Irish Demonologist Gavin Canavan