To celebrate Hellraiser’s 25th Birthday, ANDREW GARVEY sat down to watch its sequels spiral downward into hell. Forunately he survived the marathon and wrote this …

Having watched the first two films to mark the 25th anniversary of the original’s release (both reviewed here and here) I set about watching the ensuing seven sequels.  That’s seven films, several of which are widely regarded as lucky to even earn straight-to-DVD status, altogether running for about six hundred and fifteen minutes, or a whopping ten and a quarter hours.
All watched in four sittings.

Why would I do this?  So you don’t have to.  And because no matter how bad some of these sequels may be, Hellraiser – as a concept and in at least some of its execution – will forever remain a classic of British horror cinema.
Please, read and enjoy.  I have seen such sights and must tell you of them. 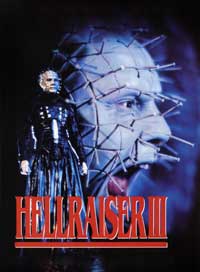 A messy, poorly acted and over-ambitious departure from the tone, setting and style of the first two films, this plays more like a bog-standard action/horror film complete with a cack-handedly designed crew of new Cenobites.  While not awful, Hell on Earth suffers from just not feeling like a Hellraiser film at all.  Save yourself the time and watch this glorious Motorhead video for the film’s soundtrack instead.

The last Hellraiser film with any input whatsoever from creator Clive Barker, Bloodline was disowned by director Kevin Yagher.  Sprawling across three different eras and hamstrung by some shonky special effects, yet more ropy replacement Cenobites and woeful acting it at least has a decent story that fleshes out the torturous history of the iconic puzzle box.  Not as bad as expected.

An interesting, if disjointed, poorly executed experiment, the first straight-to-DVD instalment plays out as a twisty-turny psychological cop thriller.  True, the cops are constructed entirely from cardboard and cliché but with Pinhead returning to the kind of minimalistic focus on personal pain and suffering that made the original so creepily compelling this is a shockingly decent sequel, all things considered. 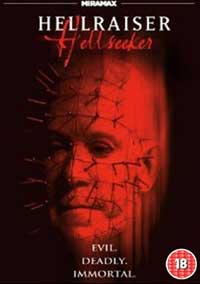 A ramshackle, paranoid horror/murder mystery that borrows much from the previous film (and plenty from other horror films), Hellseeker clocks in at under ninety minutes but feels much, much longer.  While Kirsty Cotton’s return is welcome and there’s a few good scares and some nightmarish images the film tries too hard to confuse the viewer and becomes a numbing mess long before the intriguing ending.

A nice looking plothole festival, shot in Bucharest – a fittingly grand, but neglected and abused city – Deader makes little sense and even less of an impression.  An existing horror script that was uncomfortably shoehorned into a Hellraiser film, Deader signals a significant fall in quality even from the previous outing.  This film is not recommended. 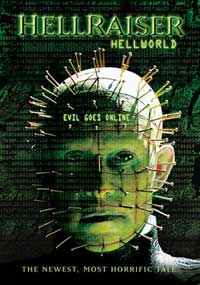 Made immediately after Deader, cinematographer Rick Bota’s third and final Hellraiser directing job is crippled by a nonsensical script, pitiful dialogue and spectacularly irritating characters who at no point behave like real human beings.  Imaginative yes and boasting, like Bota’s other efforts Hellseeker and Deader, good visuals, it’s still utter rubbish, largely due to a terrible story.

The iconic Doug Bradley – Pinhead in every previous film, isn’t the only thing missing from this feeble excuse for a film, despite the revival of some of the more important Hellraiser concepts.  Logic, good acting, sympathetic characters and decent scares are all absent, presumed barely considered.  Throw in a pantomime Pinhead and truly atrocious dialogue and the best thing about this shambles is that it’s all over inside seventy five minutes.