ANDREW GARVEY looks at Clive Barker’s new Hellraiser novel, The Scarlet Gospels
After first being publicly announced in the late 1990s, just the second novel to feature one of the most visually iconic characters in horror film history was finally released in May of this year.
Barker’s ‘Pinhead’ first appeared in the 1986 novella the Hellbound Heart, was immortalised in the 1988 film adaptation Hellraiser and since then, the character (‘demon to some, angel to others’) has had a long history on screen. (Read Andrew Garvey’s reviews of Hellraiser sequels here.) 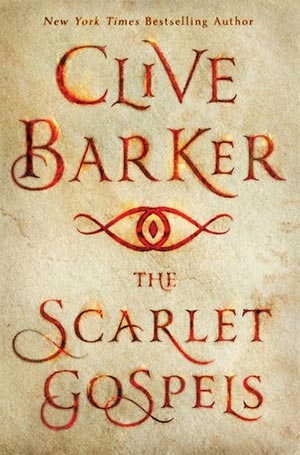 The first film was a genuine classic of British horror cinema, the second a quality sequel. The third betrayed much of the tone of the first two as it blundered into action film territory. And the grim procession of sequels that followed may have caused more combined suffering than all the Lemarchand puzzle boxes ever opened.(
If the films messed about with and sullied the ‘Pinhead’ name, he’s been far better served in comic book form. Written/plotted/overseen by Barker himself, the twenty issue ‘Hellraiser’ series published by BOOM! Studios from early 2011 to late 2012 and the lesser, twelve issue ‘Hellraiser: the Dark Watch’ sequel (2013-14) revived ‘Pinhead’s greatest enemy Kirsty Cotton and brought Barker’s occult private eye Harry D’ Amour into the Hellraiser mythos.
Barker had long promised that the Scarlet Gospels would give ‘Pinhead’ (an unofficial nickname never used by Barker himself, and one he considers undignified) his proper name. And he sort of delivers.
Early on, the title ‘the Hell Priest’ is established and while it far better fits the character, it feels a little uninspired considering the character’s origins date back to the 1970s. Surely a writer as stunningly, gruesomely imaginative as Barker could have come up with something else?
Functioning both as a sequel and a reboot of the Hellbound Heart, the Scarlet Gospels places far more of an emphasis on the Hell Priest than any other story, film or comic. Ruthlessly, murderously eliminating Hell’s existing clergy, any potential rivals and hordes of lesser, demons, our anti-hero is on a quest to find Hell’s founder, Lucifer.
So, was it worth the long, long wait?
There are moments of grisly, utter, personalised horror – the Hell Priest’s treatment of Harry’s mentor and friend, blind, old medium Norma Paine, is appalling enough when minutely described and later, when referenced in passing, even worse.
His easy betrayal of his followers and the casual way he massacres Hell’s inhabitants make him a fantastic villain. And when he faces Lucifer, the original Fallen Angel is brilliantly characterised as well.
But every truly vile antagonist needs a worthwhile hero and D’ Amour and his gang of Harrowers don’t always fit the bill. Introduced in Barker’s mid-1980s Books of Blood collection, a major character in the 1994 novel Everville and pivotal in the BOOM! Studios Hellraiser of 2011-12, D’ Amour feels a little flat and unexplored here.
The Harrowers feel even more superficial. Caz is an impressive presence but he’s the only one that is well-drawn enough to stand out. Having a vaguely described older character named Dale was awkward and distracting for me. In a world where the Walking Dead is one of the great horror franchises, I kept expecting him to put on a hat, drive an RV and start complaining about zombies. And as for Lana, the disposable dwarves in the Hobbit made more of an impression.
But the Scarlet Gospels has a bigger problem than the Harrowers. Like almost any successful story ever told, it broadly follows a three act structure of establishing the characters and the situation, setting them up for conflict and then finally, resolving everything.
Here, the first act is mysterious, gruesome and enticing. The third is spectacular, brutal and most importantly, definitive. By the end of the book, we know what happens to D’ Amour and the Hell Priest. But that middle section? It’s a struggle. Clive Barker is a legend and a visionary. Nothing he writes should feel dull but that second act, sadly does.
Harry and his friends’ journey into Hell feels pedestrian at first. Barker even has D’ Amour comment “Hell was starting to disappoint me.” Me too, Harry. After the creepily realised Labyrinthine Hell of the second Hellraiser film, and the graphically depicted one in the comic books, this more sedate version, even with the Lovecraftian monster Quo’ oto (an actual Leviathan) and a sky made of stone, feels somewhat unsatisfying.
Yet, despite its evident problems, the Scarlet Gospels remains an almost-essential read. Why?
Because at times it’s breathtakingly nasty and brilliant and Barker probably shouldn’t be criticised too harshly for having created something so similar, in a different medium, that works a little better.
Because it’s laugh-out-loud funny at times – “Caz looked down at Dale and smiled coyly as he brushed a severed nipple off his shoulder” and the Hell Priest is a staggeringly effective villain.
Because when he rises above the seeming mundanity of the Hell portrayed here, Barker still writes with beautiful, violent elegance – “there was nothing of pity here, nor, needless to say, of love, simply the unrelenting hurt and horror of tomorrow’s hell being born on the bed of glass and nails where yesterday’s hell was in the long, messy process of dying.”

26 October 2021 0
In our special 1-hour Hallows Eve special, the Spooky Isles team choose some of their favourite Halloween tracks for your listening pleasure, and chat about their selections.
Read more
Load more