MATTHEW FORDE, the author of Eerie Britain 1 & 2, tells us of the Crier of Claife, the Lake District’s most terrifying tale of terror

Legend has it that Windermere’s wooded west bank, Claife Heights, is home to a most sinister spectre.

The story goes that this spirit, known only as ‘the Crier’, would be heard piercing the mist or night’s veil with eerie petitions for a ferryman to bring his boat and give him passage.

Where he wanted to go to nobody can say, for the ferrymen working between Ferry Nab and Sawry soon learned not to heed the unnerving shrieks and none ever ventured to answer the calls. None, that is, until an intrepid (or rash) new ferryman began work there.

He didn’t believe the Crier existed and boldly stated that there was nothing to be scared of, no doubt pouring scorn upon his colleagues’ muttered warnings.

One evening, as a storm broke over the Lake District and the winds began to chop up Windermere, the new man heard a voice coming from the Heights, calling for a boat. Ignoring the words of his fearful colleagues, he rowed off towards the caller and into the inky darkness.

Shortly after, the man returned—not with any passenger that could be seen but instead accompanied by a feeling of dread so strong that it had struck him dumb. The story goes that the man expired a few days later, never having recovered his voice.

Reputedly, this Claife Crier was, in life, a monk from Furness Abbey. He fell in love with a local lady but knew they could never be together because (depending upon the version you read) either she spurned his advances or his monastic vows prevented such a union. The monk was tormented by heartbreak and he retreated to the Heights where he soon “died of grief”. What drew him to that particular spot, nobody seems to know.

While his corporeal being slipped away, his mysterious spirit remained to torment the local people and his apparition roamed around the mere. After a time, his story became infamous in the area and another monk turned up to attempt an exorcism of sorts. The monk didn’t manage to rid the place of the spirit but he did succeed in tethering the ghost to the Heights and an old quarry there, “until men should walk dry-shod across the lake”.

Assuming the story isn’t a total work of fiction, passed down orally and entering into local legend as though it had some kernel of truth to begin with, what are the non-paranormal causes behind the strange voice that is said to echo across the waters?

Well, one idea concerns geography. The Lake District isn’t a flat place by any means, it is filled with bowls and peaks and the land around Windermere is no exception. Perhaps this very topography is capable of distorting perfectly natural sounds, twisting what might otherwise be recognisable animal calls, wind, or human voices into something that might be perceived as supernatural.

The tale of the Claife Crier isn’t particularly well known nationally, but it has to be the most recognised tale of terror attached to the Lake District, and, even today (apparently) ramblers and hikers still report being stalked through the woods by a shadowy, hooded figure… 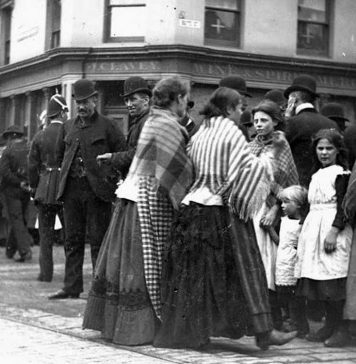 14 November 2014 1
ANN MASSEY looks at why Ireland has long been terrified of the dead rising and becoming Irish Zombies!
Read more
Load more