1.) Columbia Pictures missed out on Young Frankenstein because they wanted it in colour!

Columbia Pictures originally agreed to make the film, but wanted to cut the budget and was reluctant to allow Brooks to shoot in black-and-white. Brooks spoke to Alan Ladd Jr., who had just taken charge at 20th Century Fox. Ladd agreed to Brooks’ requirements, and Columbia missed out on one of the most successful films of 1974/75.

To ensure maximum authenticity for the laboratory sequences, Brooks called on the services of Kenneth Strickfaden. He had created the electrical effects for both Frankenstein (1931) and Bride Of Frankenstein (1935), although he was uncredited. Brooks was astonished to find that Strickfaden still had the equipment stored in his garage. So, what you see in Young Frankenstein is the genuine article. Strickfaden also got a long overdue screen credit.

The roles played by Madeline Kahn and Teri Garr were originally cast the other way around. Kahn told Brooks she would rather play Elizabeth, so Brooks asked Garr if she could learn a German accent for the role of Inga. She apparently replied, “”Vell, yes. I could do zee German akzent tomorrow. I could come back zis afternoon!”. The role was hers.

4.) Mel Brooks agreed to Gene Wilder pressure not to act in the film

Brooks traditionally appeared in his own films. However, Gene Wilder persuaded him not to, feeling that his on-screen presence would ruin the effect they were after. A compromise was reached whereby Brooks supplied off-screen cat sounds, wolf howls and the voice of a Frankenstein ancestor.

Marty Feldman’s line “Walk This Way!” was found so hilarious by one viewer that he was inspired to write a song around it. That audience member was Aerosmith’s Steven Tyler, and Walk This Way became a rock standard. Fortunate then, that Brooks (who initially thought the gag was too corny) decided to retain it after audience reaction at a test screening.

Make-up creator William Tuttle started his career as an assistant on Mark Of The Vampire (1935). For Young Frankenstein, he repeated Jack Pierce’s trick of making the creature’s face green to appear more striking on the monochrome film stock.

The shifting-hump gag was improvised by Marty Feldman. He kept moving his fake hump around for several days to see if anyone noticed. Once they did, it was decided to add it to the script. 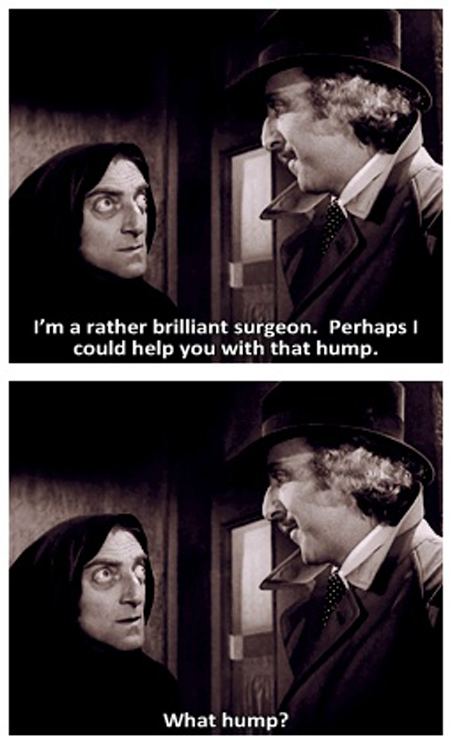 8.) Hackman got Blind Hermit role thanks to his tennis partner

Gene Hackman learned of the film from his tennis partner, who happened to be Gene Wilder. Hackman, already a three time Oscar-nominee and one-time winner, bemoaned the fact that he didn’t get to do a lot of comedy, and said he would love to do it. He appeared uncredited as the blind hermit.

9.) They cut Young Frankenstein in half to make it more funny

The first cut of the film ran almost twice as long, and all concerned were worried that it was a disaster. Brooks and Wilder reasoned that for every gag that worked, three didn’t. After a mammoth editing session to remove the failed gags, the result was a horror-comedy classic.

10.) Young Frankenstein is now in the US Library of Congress’ National Film Registry

Young Frankenstein was the last of three collaborations between Mel Brooks and Gene Wilder, following The Producers (1968) and Blazing Saddles (1974). All three have been selected for preservation in the US Library of Congress’ National Film Registry, sitting alongside Frankenstein (1931) and Bride Of Frankenstein (1935).