Although Hounslow is very old (it once boasted a stone circle) it was so rural and sparse that it wasn’t mentioned in the Domesday Book.

It only came to prominence in the 13th century with the advent of Holy Trinity Monastery, which opened in 1215.

This was to serve travellers and pilgrims from London to Winchester and Bath. Later, it became a well-used thoroughfare, with several inns.

The Heath is the last vestige of The Weald, a huge forest, which covered Southern England. A protected site nowadays, it once was the haunt of highwaymen and footpads, as well as a military base from the Civil War period.

This was the last stop on the wagon for convicted highwaymen in Haunted Hounslow. They could fall off the wagon, into the pub for their last drink before hanging and gibbeting. Indeed, the area outside the pub and along the Staines Road were gibbeting points, the idea being a deterrent to anyone thinking of breaking the law in this way. The pub is haunted by the ghost of a highwayman, who has been frequently seen.

Another ghost also makes his presence known by turning the pumps on and off, and occasionally appearing to pub goers. He is thought to have been a young man who became caught up in a fight, and who died after being stabbed to death. His ghost has been responsible for two barmen resigning their jobs.

Check out other haunted pubs here.

This church replaced the older one, which was destroyed by fire in 1943, which itself replaced the former monastery. When the monasteries and abbeys were dissolved by King Henry Vlll in 1538, Hounslow’s was among the first to go. It was administered by The Holy Trinitians, a sub order of the Benedictines. The Abbot and a sacristan refused the King’s orders to go, and kept up a fight. To no avail. They were captured, burnt at the stake outside The Bell, and the monastery sacked and destroyed. However, these two monks have been seen in recent years, in and around the new church. Their screams during the live cremations can still be heard on windy nights.

The novelist Charles Dickens wrote about this pub in his pamphlet ‘All The Year Round.’ He wrote of the old mail coach, which thundered past the place at night, causing much disturbance. Although the mail coach was discontinued in 1847 after the coming of the railway, the rattle and clatter of coach wheels can still be heard when the streets are quiet.

The car park in School Road existed for many years until being replaced by flats in 2016. In 2004 and 2007, reports were coming in to local papers about the ghost of a young Asian man dressed in a brown jacket having been seen here. It is unknown why he haunts this car park but it is believed that he was chased by other gang members and stabbed to death here. Even though the flats now occupy the site, his spirit is still seen and heard.

The Cross Lances was built in 1838 and nods its head to the ancient military town. The first landlord here was ‘Old Pork and Lard’, who also owned an abattoir close by. He was married to a very young girl but died while she was pregnant. His ghost has been seen and heard in the upper floors and boxes and glasses are often moved around. The ghost of a former barmaid has also been seen by the present landlord and bar staff, and appears on a regular basis.

The ghost of a highwayman riding a horse was seen crossing a family’s living room in the early 1960’s.

In 2004 the Daily Telegraph carried a story about a young Middle Eastern man who had been set upon by other youths whilst playing football in a nearby park. He and his friend managed to escape the clutches of the gang, but the victim was chased and caught at Hounslow West Tube, where he was stabbed to death. Quite why this was, is unknown for certain, but it was believed to be gang related. Since then the ghost of this young man has been seen in the foyer and on the platform.

Haunted by the ghost of an old man who was attacked for money and valuables.

The ghost of another soldier caught cheating at cards has been heard banging on the cellar door. He was thrown into the cellar when his colleagues discovered this and locked in. He was never released and died there. When the pub was rebuilt in 1933, bones and clothing of a soldier were found in the cellar and reburied in St. Leonard’s Churchyard. However, this has not assuaged the spirit, for he is often heard calling and banging on the new door. 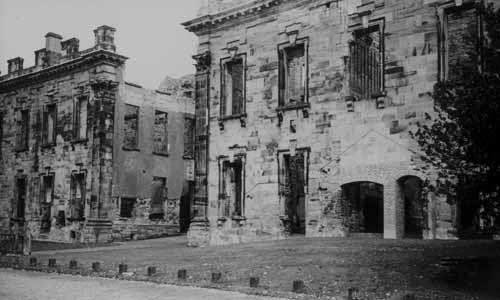