HOWARD JACKSON looks at Sefton and the creepiest 100 yards on the Merseyside! 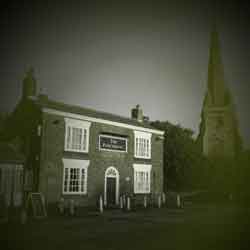 Nobody imagines a farmer with a Scouse accent but they exist in Sefton, which is just north of Liverpool.
Sefton contains flat agricultural landscape that separates Liverpool from Southport. It also has the creepiest 100 yards on Merseyside.
The Punchbowl is a pub that is popular with those from the city who do not want to travel too far to savour the countryside.
This week, the pub is decked out in jokey Halloween puppets and posters.
Halloween is being celebrated with ghost tales told by the Creepy Sisters.
Everybody should have fun. Talk to the bar staff about ghosts, though, and they become serious.
“The place is definitely haunted,” said the woman behind the bar. “I’ve got used to him. I say good night and he knocks from inside the cupboard in that corner.”
“Once or twice?” I asked.
“A lot more than that, repeated tapping.”
Later, when the pub was half empty, I walked over to the corner with the cupboard and knocked.
There was no response but possibly because I am a stranger. More than one witness has seen the ghost in the past.
The ghost is dressed in blue and according to the witnesses has a tendency to float. It makes sense that he keeps his distance from customers. No true Scouser interferes with the drinking of anyone.
Next door to the Punchbowl is 12th Century Sefton Church.
Some of the gravestones are so battered through wind and rain that the names of the dead have disappeared.
The Church has a ghost that has not only been seen but also photographed.
The photo below is convincing.
The figure resembles a vicar from an earlier era.
The photograph was taken in 1999 and there were two people in the church at the time but neither is the figure in the photograph.
In these troubled times, security is important and in the evening the church is heavily defended.
Brightly lit at night, its steeple is impressive in the dark. I visited the Church after failing to tempt the ghost in the Punchbowl.
The clock said nine and the bells rang which made me think of someone who many years ago had sat on the church steps and with his friends taunted the ghost to make an appearance.
Without warning, the bells suddenly rang and did not stop until the cocky teenagers had run for their lives from the church.
One of the gang trying to clear the church gates knocked himself out on the porch roof above the entrance.
His mates were so terrified they left him unconscious inside the church.
This occurred in 1975 and the friend who progressed to become a notable bouncer in the nightclubs of Liverpool remains convinced that he did not hear an automatic machine.
‘It was the early hours of the morning,’ he said. ‘The thing was so creepy.’
He has not seen the photograph below. I offered to share it but he is afraid it might trigger memories and nightmares.