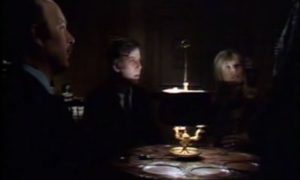 When blissfully married couple Ray and Penny Burns (played by Carson and Dunham respectively) find what appears to be the perfect home, they are quick to seal a deal to buy it, despite Penny’s slight reservations about the place. It turns out she’s right to be a bit wary, as the house was the site of a nasty murder 20 years earlier, and the event still haunts the place in more ways than one.

The perpetrator was never found, mainly because the victim is still simply presumed missing, at least until a workman tries to locate the central heating pipes in the basement. Meanwhile, John begins acting strangely, whilst a local clairvoyant tries to assist as Penny becomes fearful for her own safety…

Two episodes into its run, the series delivers its first entry with a supernatural theme, although Brian Clemens delivers a very neat twist which subverts what you might normally expect from a tale of hauntings, mediums and nasty surprises in the cellar.

Possession is a finely crafted and atmospheric entry which may even have surprises for the most hardened viewer of this kind of thing. A quality cast puts everything into it, Carson in particular giving a dignified performance.