“It is not heresy and I will not recant.”
So says Christopher Lee in the most famous words from To the Devil a Daughter, one of the most infamous Hammer horrors and one of the most least thought of to come out of the studio.
By the mid 1970s, the death knell for Hammer was deafening. The sex and gore that built the once-thriving British horror studio was now old hat and now everyone was doing it. And what made things worse – Hammer had found itself was no longer leading the pack – it was sniffing around for scraps.
After the incredible popularity of occult-themed horrors The Exorcist (1974) and The Omen (1976), Hammer headed back to Denis Weatley where they had success with The Devil Rides Out in 1967. (The title of Hammer’s last Christopher Lee Dracula outing, The Satanic Rites of Dracula was no doubt inspired by the demonic film flood as well.)
To the Devil the Daughter (1976) has a pretty bad reputation. Not only was it the last Hammer feature film for nearly 40 years – the critics panned it and the author of the book which was based – Dennis Wheatly vowed never to work with Hammer again he hated it so much.
But is To the Devil a Daughter really that bad a film?
Having never read the book, I can’t say whether Dennis Wheatley was just being a stroppy author. But despite some very fine performances from the actors involved and reasonable special effects for the time, the script is pretty rotten. 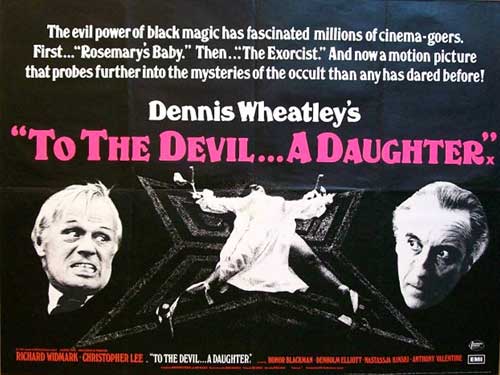 The story is relatively simple – an American horror writer John Verney (Richard Widmark) is approached by a distraught man Henry Beddows (Denholm Elliott) at a book signing, who tells him his daughter Catherine (played by 14-year-old Nastassja Kinski) is in danger from a satanic religious cult led by defrocked priest Father Michael Rayner played by always fantastic Christopher Lee, who is obsessed with creating a vessel for the rebirth of the Devil. The writer then goes about trying to save the girl, while people are killed in various ways.
Now, there is nothing really in the film that we haven’t seen before. It’s got some nice scenery of London’s Katherine Dock in it though. But pretty pictures of boats does not an awesome horror film make.
Richard Windmark was reportedly disgusted with the lack of professionalism on the set caused the unravelling of the Hammer empire at the time. He reputedly called it a “Mickey Mouse” Production because the script was being rewritten each day.
Dennis Wheatley hated the film because apparently it diverts a lot from the novel, such as the finale – which would have been cool if they filmed it. (SPOILER: Good wins over the bad – but not as sensationally as it would have if they were true to the book.)
I didn’t particularly like To the Devil a Daughter, but I didn’t hate it either. I always love a Christopher Lee film where he has dialogue and doesn’t just go around hissing a la Dracula. He has a strong, charismatic presence as a cult leader needs and other players like Denholm Elliott hold their own too. The biggest problem I had was that the initial absurd premise of a father in fear for his daughter’s safety going to an author for help. But once I got over that, I was okay with the rest of the film.
To the Devil a Daughter is no Rosemary’s Baby, but it is a lot better film than I thought it was going to be.