Trees in Britain have long been considered sacred and bring with them special power. Here are some common British trees and the folklore and mythology behind them.

Ash (Fraxinus excelsior in Latin) was once revered as the “tree of rebirth and healing” throughout the United Kingdom.

Magic rituals in Hampshire would involve passing a naked child through the split trunk of an ash tree as a cure for broken or weak limbs.

The child was said to be cured if the parts stayed together, but if the gap remained, the ritual would be ineffective.

Birch (Betula pendula) is spiritually significant in many religions, including that of Britain’s ancient druids. The druids called it the Goddess Tree and the Lady of the Woods, and it is associated with light, new beginnings, love, and fertility.

Birch was an enchantment tree with the ability to protect against evil spirits and the evil eye.

The use of the birch as a punishment most likely stems from the desire to drive out evil spirits.

A bundle of birch twigs was carried by the local magistrate on his way to court in medieval Britain as a symbol of his authority and as a means of correction. Birching’ was a type of corporal punishment using a birch rod, usually on the recipient’s bare buttocks, but also on the back or shoulders.

Blackthorn, known as Prunus spinosa in Latin, has long been thought to be a magical tree. Fairies in Celtic mythology were believed to have lived in them.

Blackthorn wood is said to have been used to make witches’ wands and staffs. And as such, anyone seen with a walking stick made of blackthorn wood was suspected of being a witch. It was thought that a blackthorn staff could ward off evil spirits.

There is a wide and sometimes contradictory body of folklore surrounding the elder tree (Sambucus nigra).

It was believed that if you planted an elder tree near your home, the devil would stay away, but if you burned elder wood, you would see the devil.

Apparently, it could also charm away warts and vermin.

Elder grows in wastelands, garbage dumps, and cemeteries, which has made people both like and dislike it. In the Middle Ages, it was said that Judas hung himself from this tree.

The end of winter and the start of summer were signalled by the appearance of hawthorn blossoms. The often-used phrase “Ne’er cast a clout till May” has nothing to do with the end of the month. Instead, it has to do with when the flowers bloom.

The hawthorn tree (Crataegus monogyna) is linked to more old beliefs and customs than almost any other tree. Hawthorn was a strong supernatural force that could be used for good or evil. It was also linked to sacrifice and protection.

People used to think that the hawthorn tree was where the maypole came from. It was also where May Day garlands came from, and the May Queen was often crowned with May blossom. In the rhyme “here we go gathering nuts in May,” the “nuts” were actually knots of may blossom.

Oak has been long been a part of European folklore. The ancient Greeks, Norse, and Celts all held it in high regard.  Druids used oak to burn in their midsummer sacrifices. The word “druid” means “oak man” in English.

Being the tallest tree in the forest, the oak was often hit and split by lightning. This led to the belief that the oak was linked to the gods of thunder.

A well-known saying says that if oak trees get their leaves before ash trees, it means that the summer will be dry.

Tradition has it that King Charles II hid in an oak tree at Boscobel in Shropshire when pursued by the Roundheads during the English Civil War. Since then, children wear oak leaves on 29 May to commemorate Royal Oak Day (now known as Oak Apple Day).

Rowans, latin name Sorbus aucuparia, are revered for their ability to ward off supernatural threats.

Due to their historical significance in witchcraft, the trees are also known Witchwood or Fid na nDruad (which translates to “Wizard’s Tree”).

The wood of the rowan tree is the most potent part of it. Rowan wood was used to make everything from milk stirrers (to keep milk from curdling) to rheumatism pocket charms and divining rods. To ward off evil spirits, rowan sprigs were traditionally hung high above doors and stables.

Rowan trees were traditionally planted in Ireland to ward off spirits, particularly the spirits of the dead. They were a common feature of the ornamental landscaping in Welsh churchyards.  And in Scotland, cutting down a rowan tree was considered a terrible insult.

In English folklore, willows have a sinister, menacing reputation, so much so that they have been thought capable of uprooting and stalking travellers.

Willows, known as Salix spp. in Latin, were once considered trees of celebration in biblical times, but that changed over time.

The trees are now frequently associated with sadness and mourning in classical poetry, with Ophelia drowning herself near a willow in Shakespeare’s Hamlet.

The bitter taste of willow is thought to have contributed to this association.

Yew trees (Taxus baccata) have long been associated with death. Yew trees older than their churches can be found in at least 500 churchyards in England.

We don’t know why yew trees were planted in churchyards, but one theory is that they were planted over plague victims to protect and purify the dead. Another idea holds that churches were the only place cattle couldn’t enter, making them a secure place to plant yew trees. The leaves of yew trees are poisonous.

Yew trees are both a symbol of death and of immortality. For centuries, yew tree branches have been carried on Palm Sunday and at funerals.

You can read about all the folklore of all sorts of trees and plants at an excellent site, www.Plant-Lore.com 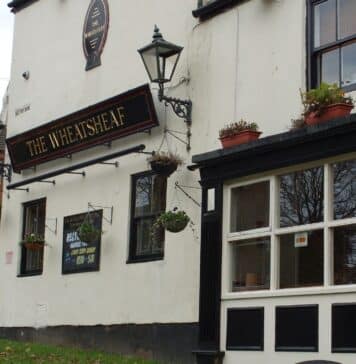 6 September 2022 0
A charity ghosthunting event at The Wheatsheaf pub in West Boldon, Tyne and Wear, unearthed many spirits and one very horrific event from the past, says ROB KIRKUP
Read more
Load more