The Hermetic Order of the Golden Dawn has contributed a huge amount to our collective image of magic.

Whether you’re interested in the books of Dennis Wheatley, or if you’ve ever seen a Tarot card, you’ve probably unknowingly felt the influence of the Golden Dawn.

The Beginning of the Golden Dawn

The start of the Golden Dawn came from a typically Victorian romantic idea: in 1866 a small number of Freemasons came together to form the Societas Rosicruciana in Anglia (SRIA).

Their founder was a clerk called Robert Wentworth Little who was fascinated with the work of Christian Rosenkreutz, a German doctor from the 14th century whose name is attached to a body of mystical writers that might or might not have been filled with secret messages.

Rosenkreutz’s writings inspired a series of mystics in Britain and France, with posters in the 16th century appearing in Paris to claim the order was still in action.

Whether this was really the case or not, Rosicrucianism had a huge influence on the rituals and grades of Freemasonry, and it was on these rites that Wentworth drew when he was creating his SRIA.

Using similar structures and rites to an 18th century group called the ‘Gold und Rosenkreuzer Masonic Order’, Wentworth consulted an esotercist and Egyptologist named MacKenzie to blend Egyptian mysticism and the French Occultism of Eliphas Levi with their rites.

The SRIA was the prototype of mystically inclined, semi-masonic orders. By 1887 the members of the SRIA had banded together to form a new magical group: The Hermetic Order of the Golden Dawn.

The Hermetic Order of the Golden Dawn

“For the purpose of the study of Occult Science, and the further investigation of the Mysteries of Life and Death, and our Environment, permission has been granted by the Secret Chiefs of the R.C. to certain Fratres learned in the Occult Sciences, (and who are also members of the Soc. Ros. in Ang.) to work the Esoteric Order of the G.D. in the Outer; to hold meetings thereof for Study and to initiate any approved person Male or Female, who will enter into an Undertaking to maintain strict secrecy regarding all that concerns it. Belief in One Godnecessary. No other restrictions…”

Westcott and Woodman were retired medical men: a coroner and a doctor respectively. Both were senior Masons, and both were keenly interested in Rosicrucianism, Hermeticism and Kabbalah.

Mathers was the son of a clerk, brought up by his widowed, and steeped in the occult.It’s possible that having been brought up by such an influential female figure was what inspired Mathers to admit women into the Golden Dawn.

The egalitarianism of having male and female members in the same lodge certainly set the Golden Dawn apart from the SRIA. They had a number of high profile female members, including the actress Florence Farr, the theatrical patroness Annie Horniman – whose father founded London’s Horniman Museum, noted artist Moina Bergson, and the writer Violet Frith, who would be better known as Dion Fortune.

The order also had a number of high-profile male members, including the poet W B Yeats, the fantasy-horror writers Algernon Blackwood and Arthur Machen, and later the notorious magician Aleister Crowley.

Mysticism of the Golden Dawn

There are several stories on how the Golden Dawn acquired its most important rituals. The most romantic is that a set of papers were found in the collection of a then newly-dead occultist called Frederick Hockley.

This document, named the ‘Cypher Manuscript’ was written in a 16th century cypher, containing information on Egyptian mysticism, Kabbalah, medieval spirit conjuring and the works of Dr John Dee.

These documents were ‘translated’ by Westcott and Mathers, who used them to derive the basic teachings and rites of the Golden Dawn. The documents also contained the address of a German Rosicrucian called Anna Sprengel – from Neuremberg – who was a member of the original, medieval, order of Rosicrucians.

When Sprengel wrote to Westcott that she approved the Golden Dawn as an official descendent of the Rosicrucians, the order’s path was set. It had a masonic system of grades set on the Kabbalistic Tree of Life, and all members studied magical techniques.
Methods involved the use of medieval grimoires like The Lesser Key of Solomon, a book allowing the sorcerer to invoke demons.

Other studies worked with the angelic magic of John Dee, Astrological talismans and semi-Hebraic mysticism like the Lesser Banishing Ritual of the Pentagram.

Greco-Egyptian concepts like The Holy Guardian Angel (from a papyrus translated by the Cambridge Antiquarian Society in 1852) were mingled with mathemagical number squares, and sacred geometry. Biblical mythology was shaped with Tantric philosophy and astrology.

However, despite their founders’ earliest promises, the lowest grades of the Golden Dawn were only taught magical theories. They weren’t permitted to practise.

There was a secret society within the secret society. After a visit to Paris in 1892 McGregor Mathers said that he had been contacted by the superhuman leaders of the Theosophical Society, whose leader had just died, and ordered to create an elite magical order within the Golden Dawn.

These three highest grades would be called the ‘Rose of Ruby and the Cross of Gold’, or the Rosy Cross. This order would be the only part of the organisation permitted to engage in practical magic.

The inner order practised true magic: binding spirits and communing with deities. Mathers would continue to receive messages from the Secret Chiefs via signs and mystical communications.

The Beginning of the End

As Mathers became more secure in his running of the Rosy Cross, he became more autocratic and narcissistic. He claimed that he was descended from the Scottish Clan McGregor, and adopted the titles Chevalier MacGregor and Compte de Glenstrae.

He also ran the Rosy Cross like a military unit, behaving like the colonel of a regiment rather than the head of a mystical order, and stated incorporating more and more pagan elements that disquieted more Christian members like Woodford and the scholar Edward Arthur Waite. The founding document of the Golden Dawn had specified belief in one God, and yet in 1900 Mathers said that he, “recognised no superiors but the Eternal Gods”.

This was not the only controversy in the Golden Dawn. Members like Florence Farr had stated forming their own magical cabals within the existing temples, and accusations of Occultism had forced the Crown Coroner Westcott to resign. This left Mathers in full charge of the whole order, which was rapidly expanding.

Added to that, Mathers had moved to Paris by 1894, meaning that however autocratic his style, the British lodges were increasingly out of his reach.

The End of the Golden Dawn

Finally, the last straw came with the initiation of the occultist Aleister Crowley in 1900. Crowley was already felt to be an unsuitable person by the London adepts, but perhaps because of his middle-class roots, or Crowley’s having been brought up alone by his mother, Mathers defied them and initiated Crowley into his Paris temple.

By now Anne Horniman and Westcott had stopped paying Mathers’ bills, and Horniman had been expelled from the Golden Dawn for the offence. The year after Mathers had also noticed Farr’s cabal with the London temple and responded by also excommunicating her.
The final confrontation came when, on April 19th 1900, Aleister Crowley arrived at the Isis-Urania Temple in London, wearing “…Highland dress, a black mask over his face, and a plaid thrown over his head and shoulders, an enormous gold or gilt cross on his breast, and a dagger by his side.”

Lodge members W.B. Yeats and Edward A Hunter barred the doors to the Temple and refused to recognise Crowley’s Parisian initiation.

An embarrassing scene was made worse by Crowley calling a policeman, who advised him to put the whole thing in the hands of a lawyer.

Two days later the Isis-Urania Temple passed a motion officially refusing Crowley admission, and expelling Mathers and another member from the order.

The time of the Golden Dawn was over.

1 May 2015 0
BECKY KEANE counts down five haunted places you can visit in Creepy Chorley...
Read more 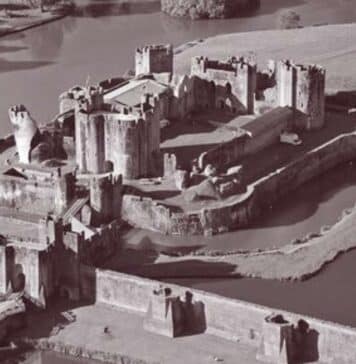