Spooky Isles interviews  Mark Smith from Northern Ghost Investigations (NGI). He says he was an “armchair investigator2 for 30 years before joining NGI about seven years ago. He works mainly around Teeside and Durham. 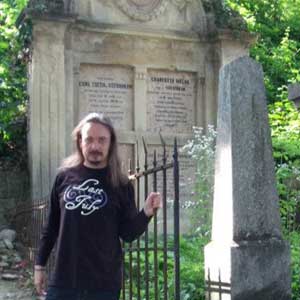 What was your first Paranormal encounter?
I would have to say it was what I still consider to be some poltergeist phenomena that happened to me when I was living at my parents house in Stockton-on-Tees as a teenager. It was a Wednesday afternoon and my mate Dave had come round for our usual weekly chat. I was going to be getting a new computer in the next couple of days and was worried that it would be too large to fit on the desk in my room. I had purposely cleared my desk of all my junk to get Dave’s opinion on whether he thought it would fit. After that we immediately tramped downstairs to watch a video.
As the video came to an end our conversation turned to paranormal matters (as they usually did). We were talking about psychic ability when I remembered that I had a word association test in a book upstairs that was supposed to test how likely you were to be psychic. We though it would be fun to try the test so we both went back upstairs to fetch the book from my bookshelf. On entering my bedroom I got a bit of a shock. There, on my newly cleared desk, was the very book we had been talking about. We both looked at each other not knowing what to say. We were the only people in the house and had been in each others company the whole time. Neither of us has gone up stairs to use the toilet during the video or anything like that.
The very next night I was staying up to watch Prisoner Cell Block H (Let’s get the jokes over now shall we?) with my parents. During the first commercial break I went up to my room to fetch a pillow off my bed, as I often used to do when watching late night TV. I had a cabin bed at the time with curtains that pulled across it. I never used to close the curtains but I was shocked on this occasion to find the curtains totally closed. I had been in the room 15 minutes earlier and they had been open and both my parents had been in the same room as me the whole time. Both this and the book incident started to really make me believe that we had some sort of poltergeist phenomena taking place in our house.
The next incident happened a few days later when my mother and I were making a list for something, I forget what. She had been writing with a free pen that we got from a Holiday Inn. She put the pen down on the table as we chatted about something or other. When she went to pick the pen up again it had completely vanished. Neither of us has seen where it went and we searched high and low. Not that it could really have gone anywhere except on the floor beneath the table. It never did turn up.
By this stage I was waiting for the next strange event to happen but it never did. Whatever had been going on in our house that week all those years ago didn’t seem to want to play anymore and the events remain a mystery to me to this very day.

Do you believe in ghosts, and if so, what is a ghost?
Well I believe people have genuine ‘ghost experiences’, whether they have anything to do with the commonly accepted idea of ghosts being the spirit of your dead Aunt Mabel I’m not too sure. If pressed I would have to say that I think that we ‘see ghosts’ in our minds, possibly brought about by external environmental factors working on our psychology/physiology (or maybe I’m just talking gobbledygook). I’m not saying they are necessarily just products of our imagination though.

What evidence have you personally uncovered that makes you consider ghosts are real?
Evidence? If anyone has any evidence I’d love to see it.
Over the years I’ve encountered some strange things such as the poltergeist stuff that I mentioned above and the now legendary NGI ‘Dancing Wardrobe’ incident. Alas you’re just going to have to take my word that they happened because any proof is sadly lacking, but isn’t that all too often the case in this field. I’m convinced that there is some forces at work that we don’t understand yet though and that’s what keeps me interested.

Are you skeptical of the claims others make of their findings?
You have to be if you want to be an effective investigator. If you’re not skeptical then you’re just gullible in my book. I’m even skeptical of my own claims too. Just last week I solved a 21 year old mystery of a piece of video footage that I recorded in Arizona in 1992 just by doing a bit of internet research.
Here’s the link to the video in case any one wants to try and solve the mystery more quickly and make me look like a fool:

How do prepare for a ghost hunt?
Well, we don’t actually ‘hunt for ghosts’ in NGI, especially when going into peoples homes. We primarily involved with looking for answers as to why suspected paranormal events are happening. I suppose we just try and get into the fame of mind of being as friendly, polite and understanding as possible.

What tips would you give for someone going on a paranormal investigation for the first time?
Don’t expect it to be anything like does on TV, question everything and form your own opinions. If someone tells you that the device they have in their hand can detect ghosts, then your first response should be “how exactly?” and not “cool, where can I get one?”

What is your favourite piece of paranormal investigation equipment?
Critical thinking is the most important thing, but if you want me to state a tangible piece of kit then I suppose I’d have to say a camcorder. At least if something happens on an investigation and you have it on video you can review the footage. That at least gives you something to work with.

Are you psychic? Do you consider being psychic a help or a hindrance for paranormal investigations?
I don’t think I’m psychic in the slightest, although I do find the subject interesting. I think that psychic ability is worthy of investigation in itself, but I don’t feel that it helps on paranormal investigations at all. It’s way too subjective and often serves to muddy the waters even further than they already are.
I should also say that it’s not something we would consider employing when looking into a private case either. You owe it to ‘clients’ to be as ethical as possible and only deal in facts as best you can.

What makes a great haunted location?
Well as you probably know, paranormal investigation is deadly boring for the majority of the time, so I suppose you may as well be sitting in the surroundings of a nice castle or stately home being bored than being bored in your local community centre. After saying that, most of those historic places haven’t had a single credible report of paranormal activity in decades, so I personally enjoy locations where ‘activity’ is currently alleged to be happening, which more often than not is in peoples private residences.

If you could investigate any haunted location, where would that be?
Well I’d need a time machine, but Borley Rectory would be cool. Not because I think it was as haunted as it was cracked up to be, but because of it’s significance in the history of paranormal research. I’m a bit of a ‘ghost geek!’

What scares you about Ghost Hunting or Paranormal Investigations?
The fact that in 2013, paranormal groups who are going into peoples homes are still putting photos of ‘orbs’ on their websites and waving K2 meters around. Scary indeed!

In your opinion, what is the most haunted area in the UK or Ireland?
Well, I suppose there’s the usual suspects such as York and Edinburgh, and Richard Felix champions Derby (but he would wouldn’t he). I supposed I’d probably have to be predicable and say York as I’ve enjoyed many a day there in its plethora of ‘haunted’ pubs.

Read any good paranormal books or watched any good paranormal TV shows/movies recently?
My favourite book  is ‘This House is Haunted’ by Guy Lyon Playfair and has been since I was small. It’s the full account of the Enfield Poltergeist and I would recommend it to anyone. I also enjoy anything by Peter Underwood and ‘Investigating the Paranormal’ by Tony Cornell is a great read. As for paranormal TV I much prefer the old style shows such a Arthur C. Clarke’s Mysterious World/World of Strange Powers than any of the modern stuff.

Tell us about your favourite moment from a paranormal investigation.
That would probably be the ‘Dancing Wardrobe’ incident at The Schooner Hotel I mentioned earlier. It was my first time out with NGI and although I only heard the noise it made as I was in the next room, it was witnessed by five or six people. You could say it was beginners luck as it’s all be downhill from there. There was a time when we got lost and thought we were going to have to spend all night sleeping rough on a windswept moor, but we won’t go there 😉